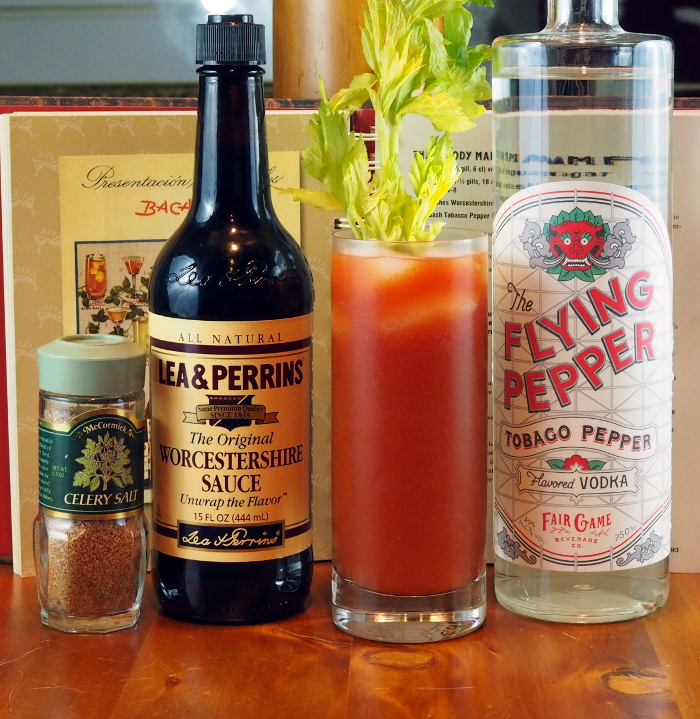 Stir alll together in an iced highball glass. Sprinkle celery salt on top. Garnish with a celery stick.

I’ve read that in the early days of cocktails they were consumed in the morning, providing an almost medicinal lift to the rest of the day. Now, at least in Western society, the consumption of alcoholic beverages before noon is frowned upon, and most are expected to wait until after the work day has ended.

There are two exceptions to this: The Mimosa and The Bloody Mary.

The good Doctor doesn’t mention the Mimosa (champagne and orange juice) in his book, so I won’t make it, but he does list the above recipe for the Bloody Mary. Here in North Carolina we were preparing for a lot of rain from a hurricane passing through, so since I knew I’d be home all day I decided to start it off with this cocktail.

It’s tasty, although vodka doesn’t usually add much flavor so you are basically tasting spicy tomato juice. It’s not something I usually seek out, but when you are preparing for a day of drinking (or recovering from one) it can be very nice.

Notes: I used V8 since I think it has a more complex flavor than plain tomato juice, and I wouldn’t have made this without Fairgame’s Flying Pepper Tobago Infused Vodka. It was made for this cocktail, and since it adds just the right amount of kick I left off the Tabasco sauce (plus we down here in NC tend more towards Texas Pete).