Jeffrey Morganthaler claims this is the Perfect Amaretto Sour: 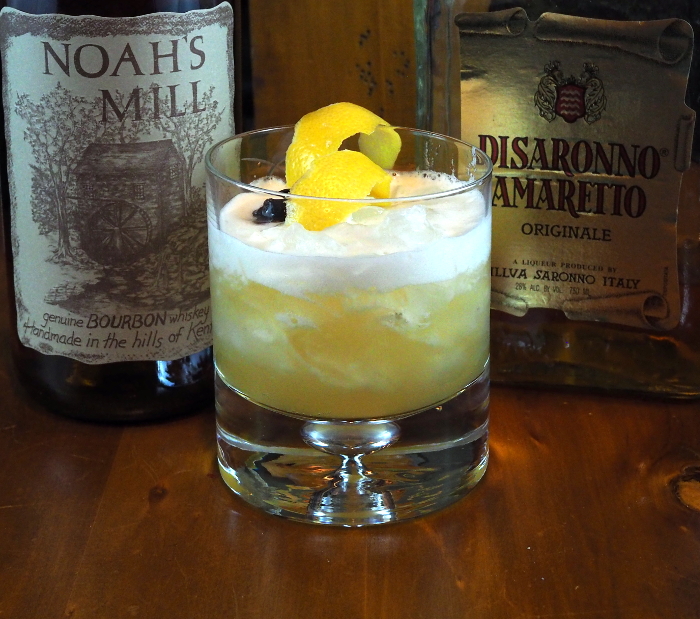 Spoiler, he would be right.

I’ve made well over 100 cocktails at this point and not a single one of them called for Amaretto, an almond-flavored liquor from Italy. I do have a bottle (I think I’ve used it in baking) and I do remember drinking a few Amaretto Sours in my misspent youth. Mainly I associate them with a sweeter, less powerful margarita, and I hadn’t thought of them much until this weekend.

I was off doing geeky things when I came across an old post by Morganthaler entitled “I Make the Best Amaretto Sour in The World“. Soon thereafter, and strictly for scientific purposes, I set out to test his claim.

He addresses the main issues I have with the drink, that it is too sweet and doesn’t have enough kick, by adding cask-strength bourbon. Bourbon, by law, can not be less than 80 proof, although it tends to come out of the cask considerably stronger. Water is added to bring the alcohol content down, usually between 80 to 90 proof, but some varieties are bottled at cask strength which can be well above 100 proof. The first Amaretto Sour I made I knew Andrea was going to taste, so I used ever so slightly less than 0.75 ounce of bourbon. It was sweet, but not too sweet, and she really enjoyed it.

For mine, I used slightly more bourbon than called for, and it really changed the character of the drink. The sweetness was tempered more than one would expect considering the small difference in amount, and I enjoyed mine a lot too. This does make the Perfect Amaretto Sour, and as I am hoping to get his book for Christmas perhaps I’ll be making more of his cocktails.

Notes: He calls for Lazzaroni Amaretto, but states that Disaronno (which is what I had) works as well. For the bourbon he used Booker’s, but since I didn’t have any of that I used Noah’s Mill, a tasty cask strength bourbon bottled at 114.5 proof.