Courtesy of the Cocktail Wonk, it’s the Golden Gun: 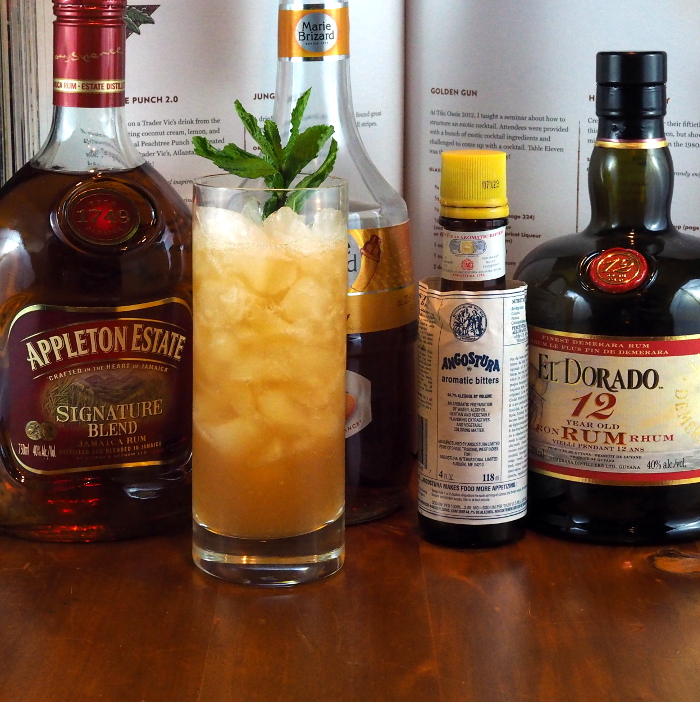 The recipe is from the Smuggler’s Cove book, but I came across the book review on Cocktail Wonk while researching rums.

Even before I set out to make all the recipe’s in Ted Haigh’s book, I was a fan of single malt Scotch and was pretty familiar with the culture. Then I moved on to a love affair (still ongoing) with bourbon and rye whiskeys. The rum culture is just as varied and complex but I am a novice. Now in working through Dr. Cocktail’s list of drinks, I did manage to amass a small collection of rum. He would usually give some clue as to what type of rum to use, either by color (white or aged) or region (Jamaica, Guyana, St. Croix), and I would seek out a bottle. Some stymied me: to this day I have not been able to procure a bottle of Coruba, although I did finally see one at a cocktail bar in Reno, and I could never find Lemon Hart 151, but I found a substitute in Hamilton 151 (it does look like Lemon Hart is available at Total Wine now).

In my last post I pointed out how Smuggler’s Cove maps rum into categories, but I have a few bottles that aren’t listed. These include a blend called Zaya that I got as a gift, my bottle of contraband Havana Club 7 a friend brought to me from Canada, and Cruzan Black Strap, which I bought for use in drinks from the Dead Rabbit Drinks Manual. Is “black strap” the same as “black” rum? It says “blended” on the bottle, so can I assume it fits that category?

I was hoping for some answers, specifically I wondered with the success of the book if Martin and Rebbecca Cate had put up some sort of web site with an expanded list. The Smuggler’s Cove is supposed to have over 550 rums at any one time and not all of them are listed in the book, for obvious reasons, but they would fit on a web site, preferably with a searchable index.

Anyway, in searching for such a list I came across the enlightening Cocktail Wonk article. In it they featured this recipe so I decided to try it out. It was wonderful.

Apparently this was created at a seminar on exotic cocktail structure held at the 2012 Tiki Oasis conference. It most have been a wonderful seminar for a group of students to come up with such a nice blend of sweet and sour fitting in so perfectly with the tiki tradition.

Notes: The only single pot still blended aged rum I have from the list is my 12 year old El Dorado. I used Appleton’s Signature Blend for my lightly aged rum. As for the apricot liqueur, although the Rothman & Winter is very good, I went with Brizard’s Apry since that’s what Dr. Cocktail told me to use.