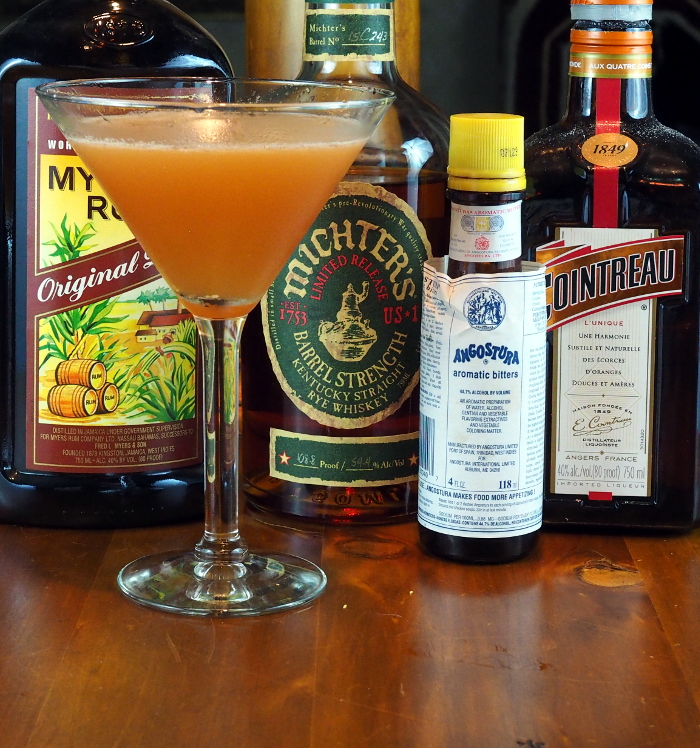 Combine all of the ingredients into a shaker and shake vigorously. Strain into a chilled martini glass.

My friend Ben and I share a fondness for whiskey, and together we have a decent collection. Unfortunately, we live more than an hour apart, so it made sharing them difficult until we decided we could just bring them to work. Thus “Whiskey Monday” (#whiskeymonday) was born.

Now, before you think all we do at work is sit around and drink, this is just a “wee dram” to start off the week and to explore the flavors of different spirits. When it was last my turn to bring something in, I grabbed a bottle of Michter’s Barrel Strength Rye that Ben had given to me as a gift on my fiftieth birthday. It was very tasty, and I wanted to use it in a cocktail.

I have used rye in a number of recipes on this blog. Rye features prominently in classics like the “Sazerac” and the “Vieux Carré”, and there are some wonderful modern rye cocktails such as my namesake “Tarus the Bull” and the excellent “Drove My Chevy to the Levy”, but I wanted to make something new.

I went to the bookshelf, but it seems like rye drinks get the short shift. Since I came up empty, I went searching on the Intertoobz when I came across the mention of a drink called the “Whoa Nellie!”

This drink originates from the 2006 Mardi Gras celebration in New Orleans. Not only is it fitting that a rye cocktail should come from that town, the fact that it rose out of the first Mardi Gras after the devastation of Katrina seems appropriate as well. Of course, I don’t get invited to parties like this, but at a party hosted by Lally Brennan along the parade route, there were a number of cocktail aficionados including Doctor Cocktail. The story goes:

Late at night, Doc was charged with the responsibility of creating a new drink. The Doc started rummaging through Lally’s liquor cabinet. After some Morgus-like failures, “divine inspiration then intervened,” and when he took a sip, he knew he had hit a home run and said, “Whoa, Nellie!”

It seemed to be just what I was looking to make, and with the citrus and rum components it fit in with the drinks I have been making from the Smuggler’s Cove tiki book.

The rye and grapefruit hark back to the “Blinker” but the rum adds even more complexity. I usually sip my cocktails, so I was surprised to find it almost gone after a few minutes.

It really did help showcase the Michter’s Rye as well. Rye is often associated with blends, especially Canadian whiskey, but one of the go-to rye’s for classic cocktails is Rittenhouse 100, a 100 proof spirit. This rye clocks in at nearly 109 proof, so it isn’t shy but still manages to be smooth and flavorful.

Notes: Outside of the Michter’s, I used Myer’s Dark Rum (as instructed) but I believe a number of other dark rums would work as well.