From Connor at the Oakleaf, it’s the Hermosa Beach: 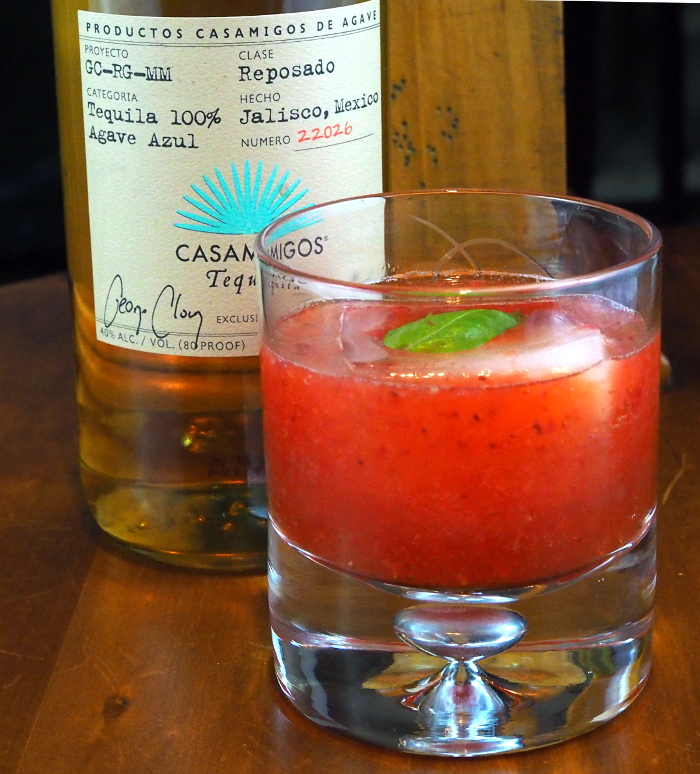 Muddle strawberry and basil in a shaker glass. Add other ingredients and strain over a large cube of ice. Garnish with a small basil leaf.

This is a fine drink that lends itself to a lot of off-topic comments.

First, this demonstrates what I love about true craft cocktails. I often refer to people who make them as “cocktail chefs” instead of bartenders, although there is absolutely nothing wrong with the term “bartender”, it’s just that I want to illustrate what goes in to a great cocktail recipe. In this case it is seasonal ingredients like the strawberries and fresh basil. Just as chefs will use nature as a template for meals, a good bartender will look toward the same sources for inspiration.

Second, this drink’s focus is on tequila. My first exposure to tequila, and pretty much all non-clear spirits, was in the form of a “shot”. You would quickly down the liquor and follow it up with some sort of chaser to kill the taste. Now that I’ve become familiar with spirits I have a visceral negative reaction whenever I see people downing shots of anything. Seriously, if it isn’t worth sipping and savoring don’t drink it. Similar to spicy food, it takes a bit of exposure to start to taste the nuances, but it is worth it. Much like a single malt scotch or a good sweet bourbon, tequila has become a spirit to be appreciated on its own.

Finally, it is nice to have Connor back at the Oakleaf. He worked there as a waiter several years ago, but left to move to New York City (yes, there was a woman involved). Now, he has moved back (and yes, there was a woman involved) and I’m very happy he did. While, before, he didn’t work the bar except at lunch, he has returned with a wealth of cocktail knowledge and experience, and it has made me miss Justin, the previous cocktail chef, a little less.

Well, back to the drink. A good friend and neighbor of mine moved to Texas several years ago. He doesn’t fly so I had to wait for him and his wife to take a road trip that brought them back through North Carolina. They wanted to go to the Oakleaf, and when I learned he had developed a taste for tequila while in Texas I insisted he try this drink. His reply was “Mmmm, that’s dangerous” and I could see his point. One could drink a pitcher of these, easily.

Notes: Espolon tequila was called for, but I don’t have any so I used something I did have, Casamigos. This is a highly rated tequila created, in part, by George Clooney. Note that you’ll want to use a reposado in this drink as a blanco wouldn’t lend enough character.