I wanted to get back to exploring real vintage cocktails, so I made one from the beginning of the 20th century, the Hanky Panky: 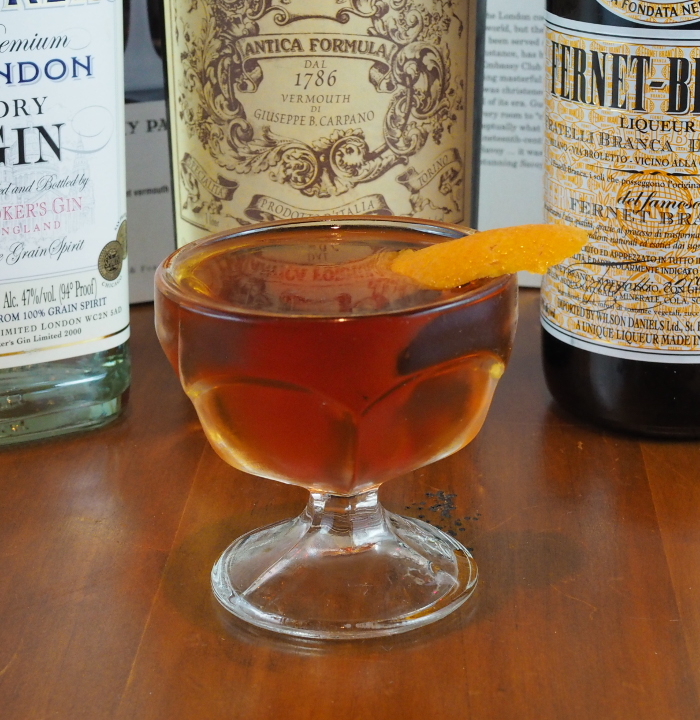 Stir well with ice in a mixing glass. Strain into a chilled cocktail glass. Twist a small swathe of orange peel over the surface of the drink.

When this cocktail was named, “hanky panky” wasn’t yet a term for sexual mischief. Instead it referred to black magic. When you read the ingredients for this cocktail you might think “bah, it’s just a sweet martini” but, oh, it is so much more. The magic comes from how superb this drink is compared to its simplicity.

It was invented by Ada Coleman, a female bartender in a field dominated by men. She is credited with building the strong reputation of the American Bar at the Savoy Hotel in London. By adding in the bitter Fernet Branca (yet another strong Italian liqueur now taking up shelf space in my bar) she totally changed the drink, but as Dr. Cocktail notes in the book the real key is the orange twist.

I’d never really worked with a twist other than as a garnish, so I was a little surprised when I twisted it over the drink and could see the surface sparkle as the oils from the peel hit it. Even though it was a small piece, it adds a lot to the cocktail and can’t be omitted. Andrea even asked if it contained Cointreau.

I ended up drinking most of this cocktail with a meal, and it didn’t pair well with the food. Still, this is a strong four if not quite a five.

Notes: I used Brokers gin which I picked up on sale at my local ABC store. It was inexpensive and came with a little plastic bowler hat on the bottle which was cute, and I think it tastes pretty good. I plan to have a gin tasting as soon as I can get my hands on some Plymouth. The sweet vermouth was Carpano (‘natch).