Over the holiday I managed to get my hands on some authentic curaçao, so I decided to try Satan’s Whiskers: 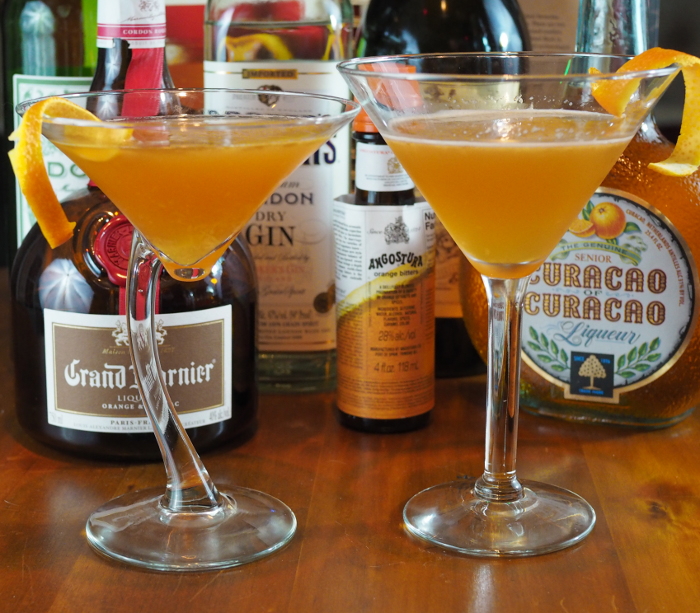 Shake in an iced cocktail shaker and strain into a cocktail glass. Garnish with an orange twist.

Back when I made the Park Avenue Cocktail I discovered that there is a difference between orange liqueurs such as curaçao, triple sec and Grand Marnier. Unfortunately, it is apparently impossible to get good curaçao in North Carolina due to its antiquated spirituous liquor laws. The brand Dr. Cocktail recommends, Gabriel Boudier, is even harder to find, as it isn’t available at either Binny’s or Total Wine, but Senior Curaçao (another of his choices) can be had, just not in North Carolina. It’s also cool to note that Senior Curaçao is made on the island of Curaçao, so let’s hope it is authentic.

Luckily, ’tis the season for people to visit so I was able to score some Senior Curaçao. I wanted to make Satan’s Whiskers since there are two distinct versions: “curled” which uses curaçao and “straight” which substitutes Grand Marnier and I figured it would be a good test to see if I could tell the difference.

This is a nice cocktail. It’s not too sweet and in fact it finishes a little bitter. Both Andrea and I prefer the “straight” version as it is slightly less bitter, but while the difference between the two drinks is noticeable, it isn’t huge, so feel free to make the “straight” version if you can’t find good curaçao and you won’t be missing much. If you don’t like bitter flavors you might want to back off the on the orange bitters – other recipes call for just a dash.

Curaçao is actually colorless. The variety gifted to me has some orange coloring added, and blue curaçao is nothing more than regular curaçao with blue coloring added. I’m debating how I’ll manage the one drink in the book that requires blue curaçao. While Senior Curaçao makes a version, I’m not sure I’m willing to shell out the dinero for, basically, food coloring.

I would rate the “curled” version a strong 3.5 with the “straight” version being slightly higher, but since I refuse to do “half” scores …