While the majority of cocktails I’ve made so far are based on rye or gin, in the early “archaic” age of cocktails the default spirit was rum, as in the Knickerbocker á la Monsieur: 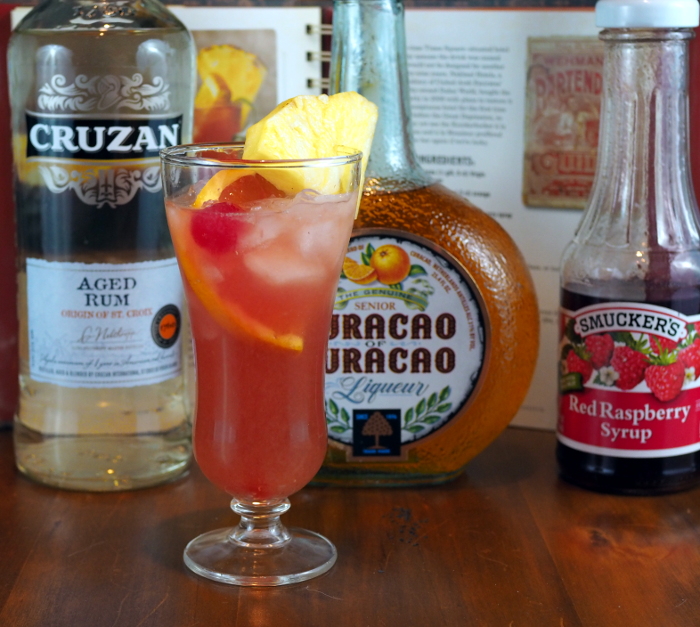 Add all to crushed ice in a goblet, collins glass or tumbler, stir and serve. Garnish with more fruits in season.

In the book Imbibe! the author describes three “ages” of cocktails: the Archaic, the Baroque and the Classic. This drink was introduced in 1862 by the famous bartender Jerry Thomas (the focus of much of that book) which places it in the Baroque age, but it does feature rum which was a staple in the early days of cocktails.

I was surprised (and my wallet lightened) by the fact that many vintage cocktails call for rum from a specific place: Puerto Rico, Jamaica, Cuba and the Virgin Islands. I haven’t had the time to have a rum tasting to compare the differences, but in my research most of the Virgin Islands rum originates in St. Croix, and the best known brand is Cruzan.

One might think with all of the fruit that this cocktail would be overly sweet, but it isn’t. Andrea tends to like sweet drinks and she thought this one was just “okay” since you can definitely taste the alcohol. I thought it was good but not spectacular. It is fruity if not sweet, and I liked the taste of the rum, but it isn’t a drink I would seek out.

Notes: For some reason I had it in my head that this drink called for light rum, so I used the lighter of the two bottles of Cruzan that I had (both are aged). This drink might squeak out a 4 if I used a rum with a deeper body. For the curaçao I went with Senior Curaçao as usual, but some recipes I found on-line use Cointreau.