I had heard that a lot of old cocktail recipes included eggs, and this is the first I’ve ever made, The Delicious Sour: 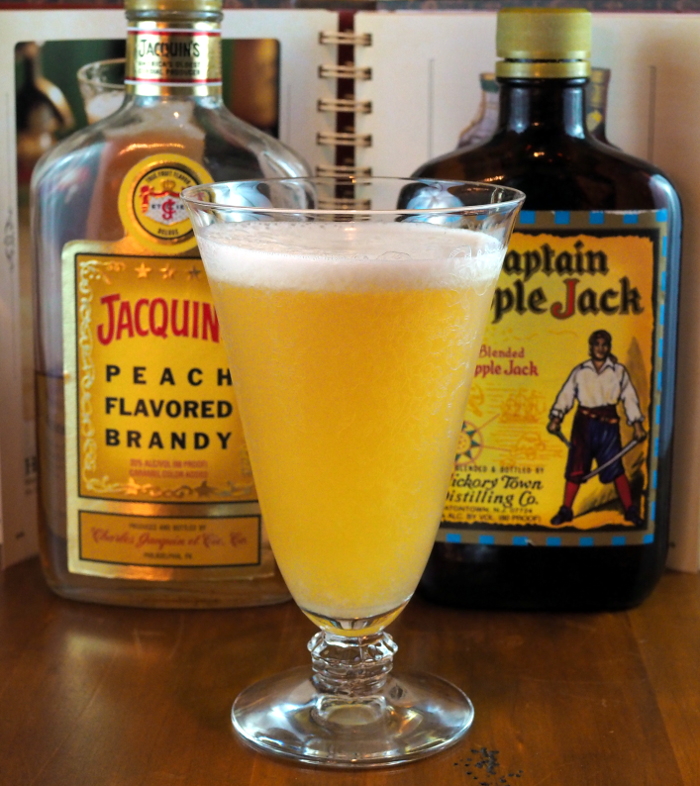 Shake all but the soda in an iced cocktail shaker, and strain into a goblet or large cocktail glass. Add a splash of soda water.

I really expected to dislike this drink. The only other cocktail I’ve made with applejack, the Jack Rose, was horrible. Also, this drink almost didn’t happen. My bar has gotten so full and dispersed since I started this experiment that I couldn’t find the brandy. I knew I had some, but the picture in the book shows De Kuyper brandy and for some reason I thought I had the same. De Kuyper spirits come in a bottle with a particular shape, and it took me awhile to find the Jacquin’s Peach Brandy that I did have on hand. I had prepared everything but the spirits and was a bit frustrated but I’m glad I was able to bring it all together.

When the Jack Rose was such a failure I thought it might have been my choice of applejack, but Dr. Cocktail suggests it several times in the book so my conclusion is that isn’t the case.

And this drink has redeemed it somewhat. I liked it, although I went from liking it, to “meh” and back to liking it during the process of drinking it. The egg white makes it real creamy, and I liked that aspect of it. It is slightly sour but not overpowering, and the fruitiness of the peach and apple flavors work well.

The Delicious Sour was invented by William “The Only William” Schmidt and published in his 1892 book The Flowing Bowl (click on the link to see some Google magic). Dr. Cocktail doesn’t seem to be a huge fan of Schmidt but he does like this drink.