When Bond, James Bond, walks into a bar, he is known to order The Vesper: 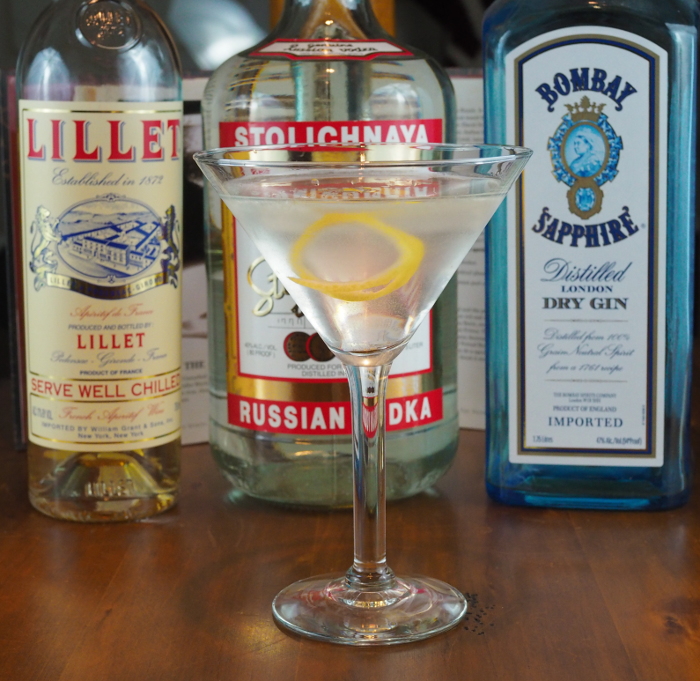 Shake in an iced cocktail shaker. Strain into a stemmed cocktail glass. Twist a large swathe of lemon peel over the surface of the drink and drop it in.

For a long time I did not like gin. But then there was the time I was at Vong’s in Chicago (sadly, now closed) with my friends Demetri and Cat. My usual go-to drink at that time was a highball of bourbon and ginger ale, but Vong’s didn’t have any ginger ale. The place was packed and Demetri ordered a martini with Bombay Sapphire gin, so rather than hold up the line I just decided to order the same to make it easy. I liked it so much I had two.

Although Bombay Sapphire is hardly vintage (it was first made in 1987), I really like the flavor the extra botanicals add. I think they can detract a bit when mixed in other classic cocktails, however, so I tend to choose another gin for them, but since this is basically a vodka martini I figured that Sapphire would work well.

This cocktail is odd for a number of reasons, but it is an oddness that results in genius. Most martinis are tempered with dry vermouth. The Vesper uses Lillet Blanc, a aromatic aperitif wine that really complements the vodka and the gin. The bit of oil from the lemon peel adds an extra depth to the drink, much like the orange peel in the Hanky Panky.

The other oddness is that built drinks like this one tend to be stirred and not shaken. You want to shake cocktails that contain fruit juice or eggs, but you tend to stir drinks that just contain spirits since shaking them adds a lot of air bubbles. You can see in the picture that I didn’t really want to wait for the bubbles to settle out so I took the picture soon after it was poured.

I used Lillet Blanc (I had it out to make Andrea a Corpse Reviver) although the original recipe called for Kina Lillet. It isn’t made anymore and Lillet Blanc is the best substitute.

This drink was made popular via the first James Bond book, Casino Royale, in which Bond’s love interest is named Vesper Lynd. Bond claims the drink is his own invention, but it was probably made before the novel was published, although Dr. Cocktail states there is some dispute as to who actually invented it. I did like the line from the 2006 remake starring Daniel Craig:

James Bond: [after Bond has just lost his 10 million in the game, to the bartender] Vodka Martini.

James Bond: Do I look like I give a damn?

Notes: I used Bombay Sapphire for the gin, although Bond called for Gordon’s. According to Dr. Cocktail the Gordon’s sold in the US is not the same as that in Britain. I just happen to like Bombay Sapphire so I used it. For the vodka I used regular Stolichnaya because I happen to have a large bottle of it for some reason.

Before you wonder why I can’t remember where a lot of my spirits come from, it isn’t due to memory loss from too much drinking but instead from the fact that people know I have a bar in my living room so they give me bottles as gifts. Sometimes it is hard to keep track.