After the Calvados Cocktail it seemed logical to explore the cocktail it was compared to, the Golden Dawn: 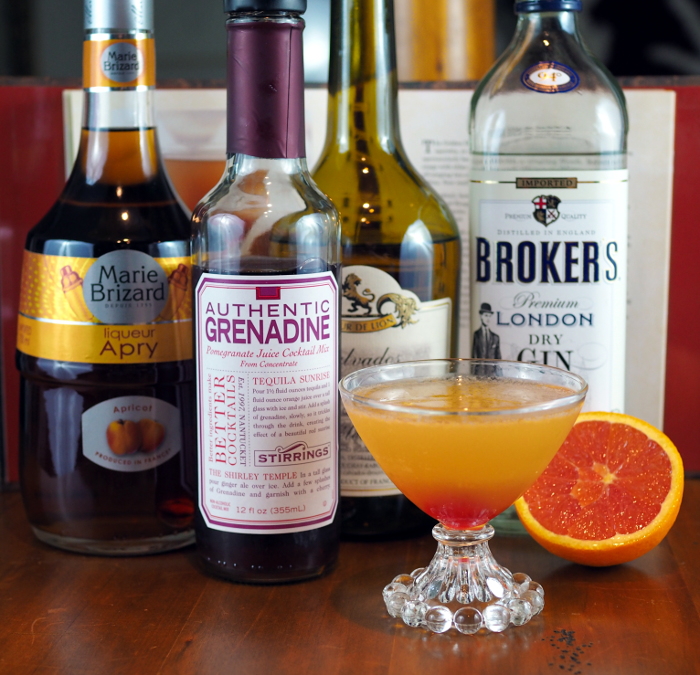 Dr. Cocktail tells us that this drink was named for the 1927 Rogers and Hammerstein operetta, but my first thought was that it was the signature drink of the magical order. In any case there is some disagreement as to the proper proportions. In the interest of science, I made it both ways (how I suffer for this blog).

The United Kingdom Bartenders’ Guild (UKBG) judged it “The World’s Final Cocktail” in 1930, and their preferred recipe is equal parts of the four main ingredients. The second recipe brings out the flavor of the gin a little more, and while I liked both I had a preference for the UKBG version.

This is also the first recipe I’ve made featuring the Apry apricot brandy. A lot of classic cocktails call for apricot brandy and almost all current cocktail chefs agree the only option is Marie Brizard. Of course, you can’t get it in NC, but thanks to the kindness of friends I was able to obtain a bottle.

I liked this cocktail a lot, even more than the Calvados Cocktail. I think it is a little more balanced and tastes more like a cocktail to me. Andrea disagreed, and asked me to make her another Calvados. The gin balances the inherent sweetness of the rest of the ingredients without adding the extra bitterness of the bitters in the other drink.

Notes: most vintage cocktails used Holland (sometimes called Old Tom) or a sweet gin. This specifically called for a dry gin so I went with Brokers. I used the Christian Drouin Calvados and the aforementioned Marie Brizard Apry. I use Stirrings Pomegranate Grenadine whenever grenadine is used as an ingredient.