The one time this phrase may actually work, “Bartender, make me a Millionaire”: 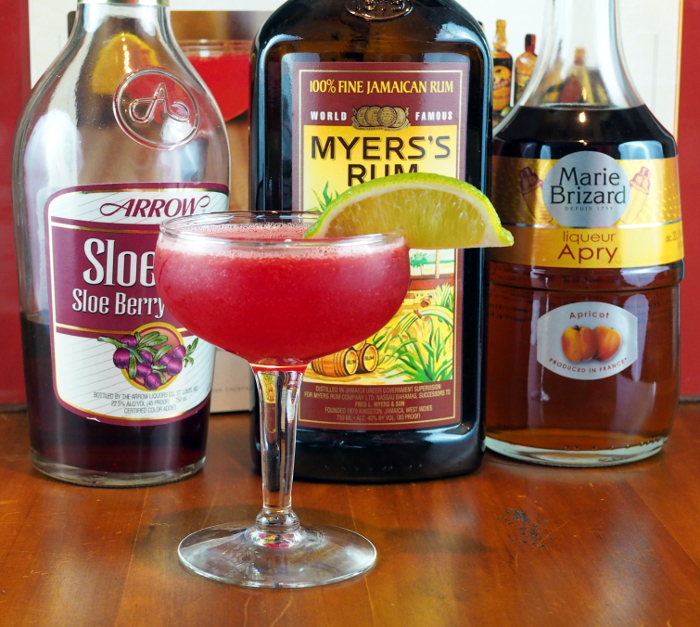 Shake vigorously in an iced cocktail shaker. Strain into a cocktail glass. Garnish with a lime wedge.

Okay, so I stole that line from Dr. Cocktail, and while he ended his recipe with it, I decided to use it at the beginning, so they are as different as a Martini and a Gibson.

I just kind of stumbled upon this recipe by flipping to a random page, finding this cocktail and going “Hey, don’t I have some sloe gin?”

When my friend Ben’s house was being built, he brought some bottles of booze into the office as they didn’t have a place for them in their temporary apartment. I took some of them home, and one of those was a bottle of sloe gin. According to Wikipedia, “Sloe gin is a red liqueur made with gin and sloe (blackthorn) drupes, which are a small fruit relative of the plum.”

It is bright red and sweet.

In the book, Dr. Cocktail references this recipe as “The Millionaire #4” from a book published in 1937. This, however, is his take on it and not an exact replica of the original. He made it less sweet and improved the presence of the lime.

I liked this drink a lot, and I knew immediately that Andrea would as well. You can definitely taste the lime, and I thought she might not like the extra tartness, so I backed of just a bit on the juice for hers. Turns out that was a mistake, as she ended up squeezing the lime garnish into the drink and then proclaiming it better.

Notes: The recipe specifies Myers’s Original Dark Rum, which I used, as well as Maria Brizard’s Apry for the apricot brandy. The sloe gin was by Arrow, a discount brand that is the only sloe gin we can get in North Carolina.