The Walking Dead may have ended for the season, but the Zombie “lives” on: 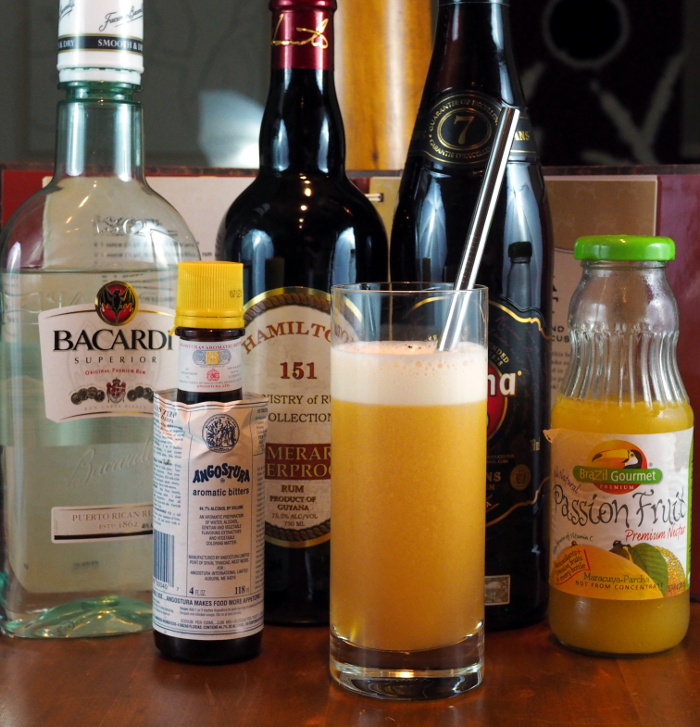 Dissolve the brown sugar in the lemon juice. Combine it with everything else in a cocktail shaker with crushed ice. Shake well, and pour all into a collins glass. Garnish with a mint sprig.

While considered a forgotten cocktail, the Zombie was well known to my misspent youth. At places that served tiki-style drinks, it was often advertised with warnings such as “One is too many! Limit Two!” which just encouraged you to try it.

From my research, Zombies are strong rum drinks combined with fruit juice. The juice disguises the fact that this cocktail has a high alcohol content. It was invented by Donn Beach of the Don the Beachcomber restaurant in Los Angeles. The book claims that this is his original recipe.

I like tiki drinks and had been wanting to try this for some time, but I needed to find the 151-proof Demerara rum. I was finally able to get some at Ace Beverage during my last trip to DC. The classics call for Lemon Hart 151, but apparently it has been discontinued and I can’t seem to find it anywhere (the website says copyright 2013). According to this Reddit thread, the Hamilton is a valid replacement.

It’s a fun drink to make, and as you shake it you can actually feel it “foaming” up. I’m not sure if it is the pineapple juice or the sugar, but you get a real nice head on the drink which makes it perfect for a straw. I liked the taste, but I felt it could be just a little bit sweeter. The next time I make this I’ll use the passion fruit syrup I have instead of the less sweet nectar, but at the moment I still have a preference for Donn’s Fogcutter.

Notes: Probably the most well known rum brand is Bacardi, which is from Puerto Rico, so I used that for the white. I didn’t have a Puerto Rican gold rum so I decided to use my contraband aged Havana Club. The Demerara rum is by Hamilton. I used the passion fruit nectar I bought for The Avenue and the metal straw was purchased from Amazon.