In honor of the Kentucky Derby, I decided to make The Georgia Mint Julep: 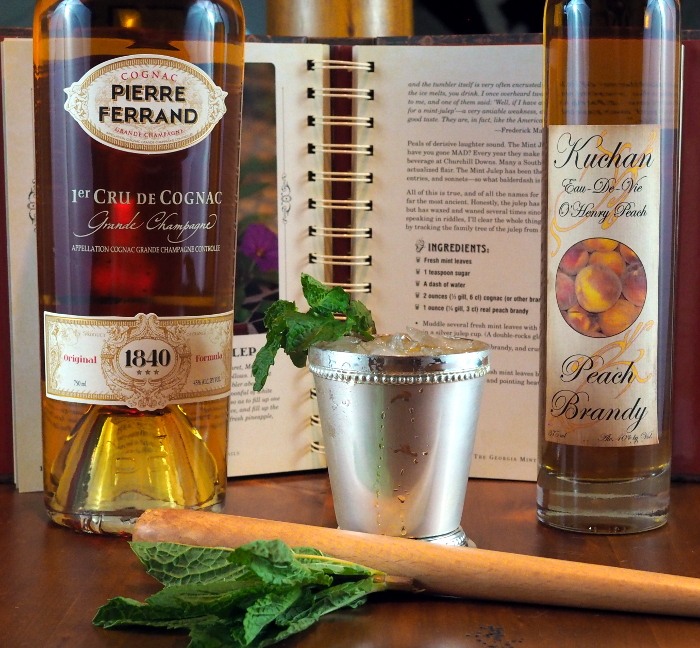 Muddle several fresh mint leaves with sugar and a dash of water in a silver julep cup (A double-rocks glass works fine, too). Add the cognac, peach brandy and crushed ice to fill. Stir! Stir! Stir! Insert several more fresh mint leaves between the cup and the mixture, sticking out and pointing heavenward.

Considering that last Saturday vats of Mint Juleps were consumed, you might be asking how this can be considered a forgotten cocktail. There are a couple of reasons. First, they were probably made with bourbon and not cognac, and second, true aged peach brandy is damn hard to find. This recipe is based on one of the earliest accounts of the Mint Julep, from British Captain Frederick Marryat’s 1840 book Second Series of A Diary in America which describes the “real mint julep” thusly:

There are many varieties [of Mint Julep], such as those composed of Claret, Madiera, &c.; but the ingredients of the real mint-julep are as follows. I learnt how to make them, and succeeded pretty well. Put into a tumbler about a dozen sprigs of the tender shoots of mint, upon them put a spoonful of white sugar, and equal proportions of peach and common brandy, so as to fill it up one-third, or perhaps a little less. Then take rasped or pounded ice, and fill up the tumbler. Epicures rub the lips of the tumbler with a piece of fresh pine-apple, and the tumbler itself is very often incrusted outside with stalactites of ice. As the ice melts, you drink.

Dr. Cocktail devotes six pages to this drink. While I haven’t counted, I’m pretty certain that is the most for any recipe in the book. You may also note that the recipe above departs from the one by the good Captain in proportions. This is because modern peach brandy liqueur is actually grape brandy, peach flavor and sweetening.

However, if you can find real aged peached brandy, you can mix 1.5 ounces evenly with the cognac. He also recommends substituting two bar spoons of simple syrup for the white sugar.

In the book he touts Penoboscot Bay Distillery as the place for real peach brandy, but it has closed. I managed to find a bottle of Kuchan Oak Aged Peach Brandy in California and had it shipped to me, so that is the recipe I made. I am hoping the gang at the local Fair Game Beverage Company is able to step up and fill the void (they make a good apple brandy) but a late frost impacted this year’s peach crop so we may have to wait.

My original hope for the picture was to have a lot more ice on the silver cup, but I’m afraid by the time I got everything set up it had faded somewhat. My initial taste was a little too sharp and strong, but as the ice melted slightly the drink mellowed a lot and I really enjoyed it. I want to play with this one a little more and maybe even try a bourbon version, but for now I’m glad the Georgia Mint Julep is no longer forgotten.

Notes: Since Captain Marryat wrote his book in 1840, I decided to go with Pierre Ferrand 1840 Original Formula Cognac in this drink, which I was able to obtain on a recent trip to Chicago. It is designed for mixing and is supposed to be in the style of pre-phylloxera vintages without the price. I liked it and it is affordable.