Because I had crème de noyeaux I made the Fairbank Cocktail: 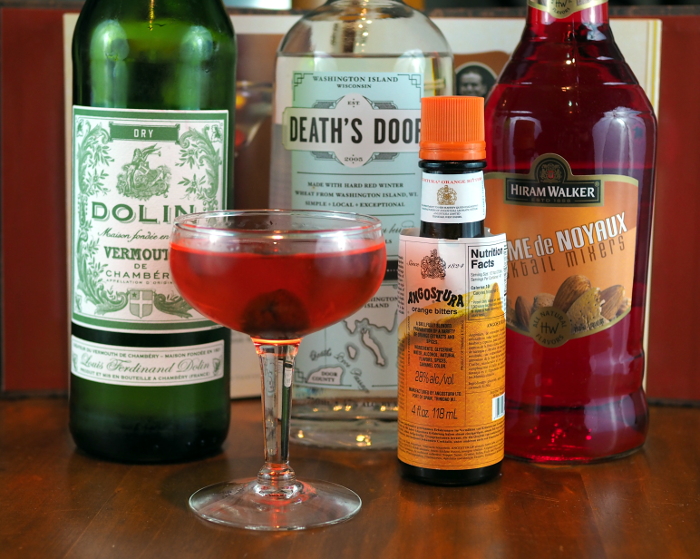 Stir in a mixing glass with ice, and strain into a cocktail glass. Garnish with a cherry.

One of the fun things about this little experiment is trying to locate all of the ingredients for these vintage cocktails. I bought a bottle of crème de noyeaux at Binny’s in Chicago, and I just wanted to point out to my two readers the effort I go to in order to get an ingredient that I will use on the order of “dashes”.

According to Wikipedia, crème de noyaux (they leave off the “e”) is a liqueur made from almonds, and after tasting it you could probably get away with using Amaretto (which is a brandy-based almond liqueur) instead. I was only able to find the Hiram Walker version which is artificially colored red, and it reminded me of cherry cough syrup (as did the flavor, although without a medicinal aftertaste). It made my version of the Fairbank very pink.

The drink itself is a modified martini and I found it to be just okay. I don’t think the crème de noyeaux added much, at least to my palate. Note that while the name is attributed to the actor Douglas Fairbanks Sr., the earliest version of the recipe, from 1922, left off the “s”, which is thought to reference a Senator from the period.

Notes: My friend Jono introduced me to Death’s Door gin, and since I just bought a bottle I decided to use it in this drink. It is very tasty. The vermouth was Dolin Blanc. I used Angostura orange bitters since I had it on hand.