Speaking of whiskey and rye, here’s Drove My Chevy to the Levee: 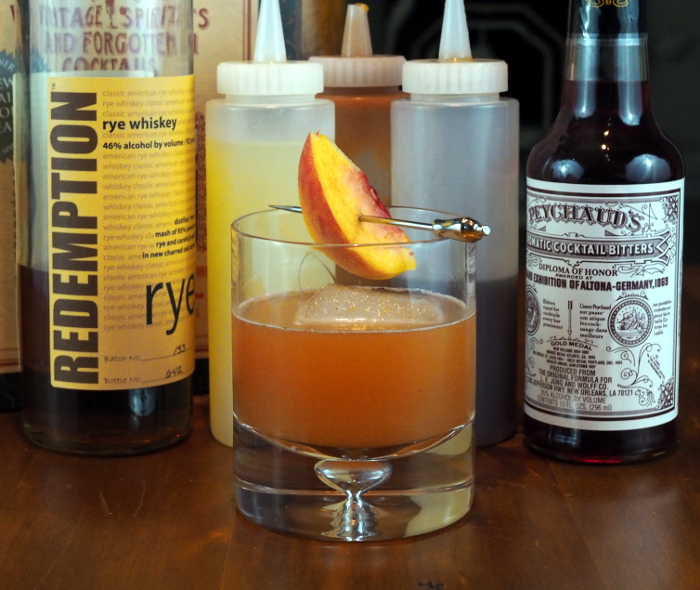 Stir vigorously in an iced glass, and strain into a cocktail glass over ice. Garnish with sliced peaches.

This is another guest cocktail from Justin Peregoy, cocktail chef at the Oakleaf restaurant.

I live in a small town, and we are lucky to have such a great restaurant as the Oakleaf (we have our priorities right, we had a microbrewery three years before we had a McDonalds). One thing that makes it great, at least for me, is Justin. He deserves the word “chef” in his title for a couple of reasons, but mainly because he was trained as a chef and he brings those skills to the cocktail glass.

For example, he makes his own tonic and his own grenadine, which greatly improves the flavor of his drinks. And he uses seasonal items for the ever changing cocktail menu, such as fresh peaches during the summer.

My “favorite” Oakleaf cocktail changes frequently, but it is currently Drove My Chevy to the Levee. It’s hard not to have two, and since I eat at the Oakleaf most frequently during lunch, this isn’t the best idea. (grin)

The cocktail does require some preparation. I don’t have a juicer than can juice peaches, but I do have a Vitamix blender that can liquefy many things, so I just blended up some peaches and then pushed them through a sieve. It made more of a slurry than juice, but I liked the extra texture in the drink. As for “brown” sugar simple syrup, make the syrup in the usual way (one part sugar to one part water) but substitute turbinado sugar (i.e. “Sugar in the Raw”) for the standard refined sugar. If you use actual brown sugar, it contains molasses which will make the drink more bitter, and Justin likes to control the bitterness of a drink with actual bitters.

This is an incredibly tasty drink that shows off summer’s peach bounty.

Notes: I used Redemption Rye as recommended, but I’ve also made it with High West Double Rye which was also quite good.