Another rare Scotch-based cocktail, The Modernista: 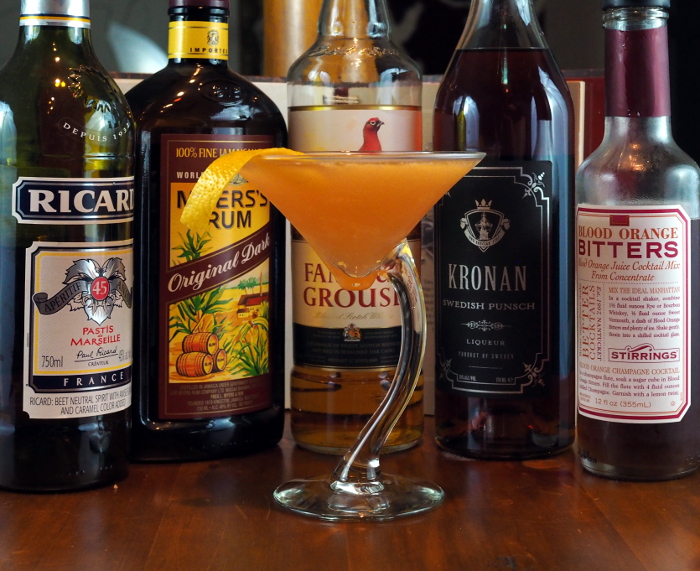 Shake in an iced cocktail shaker, and strain into a cocktail glass. Add a lemon twist.

This is Dr. Cocktail’s name for The Modern cocktail, and the references I’ve found in the intertoobz all have Scotch, pastis or absinthe, and orange bitters in common, but in vastly different proportions. A couple include sloe gin. The drink is supposed to have originated just after the turn of the century (1900, not 2000), hence the name.

At first, I didn’t much care for it. I think I may have over-poured the pastis, but even if I’d managed to nail it I think the liquorice flavor dominates this drink too much. If I made it again, I’d probably cut the pastis in half to half a teaspoon or maybe just two or three goodly dashes.

As I’ve found from many of these cocktails, I tend to warm to the drink the more I taste of it, and this was no exception, but I doubt I would make it again. The book refers to it as “a sophisticated, if challenging, beverage” and I probably just wasn’t up to the challenge.

Notes: I tend to use The Famous Grouse, a blended Scotch, in my Scotch-based cocktails. For the dark Jamaican rum I went with Myers’s Dark Rum. I was introduced to pastis and water in France, and my go-to brand is Ricard. I used Kronan Swedish Punsch and Stirrings Blood Orange bitters. Quite the chemistry set, this one.