I had just come back from a trip to Germany, and even though my body was supposed to be at four in the morning, I found myself a little too wired to sleep. I figured a nice cocktail would be just the thing, but since I’d been gone for a week I had no fresh fruit in the refrigerator. Going through all of the recipes in the book I kept getting stymied due to a lack of lime, lemon, orange or even grapefruit juice.

Then I found the Lucien Gaudin Cocktail. 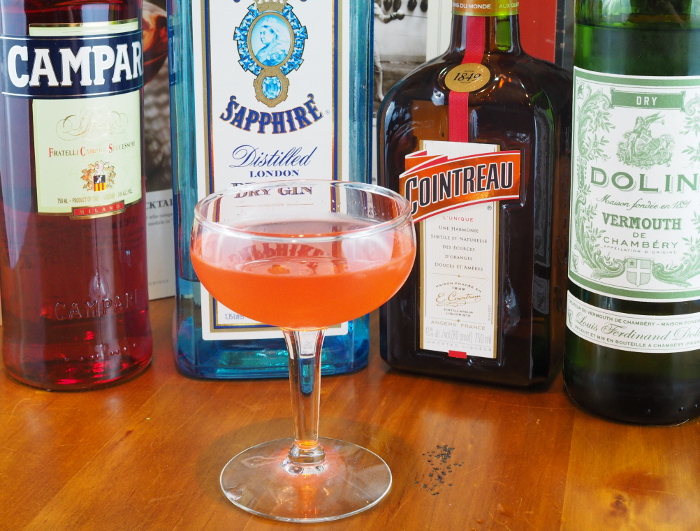 Stir with ice in a mixing glass and then strain into a cocktail glass. Garnish with an orange twist.

Lucien Gaudin was a famous fencer who medaled in the three Olympic Games in the 1920s, so this is a true vintage cocktail.

When I read the ingredients, I figured this might just be the Boulevardier with gin, but I was wrong. This is a wonderful libation, slightly sweet with a nice tangy flavor. I used my favorite dry gin, Bombay Sapphire, and my favorite dry vermouth, Dolin. The sweetness of the Cointreau is offset nicely by the bitterness of the Campari.

Now I want to experiment by adding Cointreau to the Boulevardier – maybe call it the Gaudin Boulevard?

Actually, I would put this as a 4.5 when compared to my other 5 rated cocktails, but I really don’t want to set the precedent of “half stars”. If I have to choose between a 4 and a 5, I’m going with a 5. I gave the Boulevardier a 4, and I would imagine that 9 times out of 10 I’d rather have this cocktail, so I think the rating works.