Featuring another obscure ingredient, here is The Flying Dutchman: 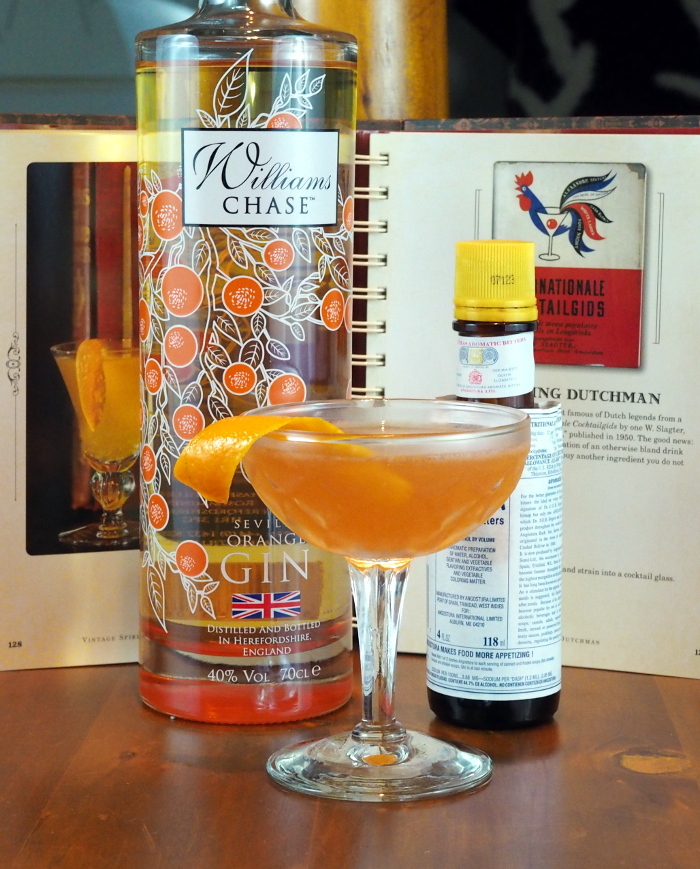 Shake in an iced cocktail shaker, and strain into a cocktail glass. Garnish with an orange twist.

This drink, from a 1950’s Dutch cocktail book, calls for orange gin. Now gin and fruit juice just go together (as the poet Snoop Dogg pointed out so long ago) so it seems logical that it would be used to create a flavored gin, but at first I was a little hesitant to try this drink because of a bad mental association with flavored vodkas.

I’m not a fan a vodka, simply because in its natural state it is supposed to be flavorless. I like the taste of spirits and I drink to enjoy that and not to get intoxicated. I recently read that there were over 400 varieties of flavored vodka, simply because you have to do something to make it interesting.

Gin, on the other hand, has a natural flavor profile, although that can vary (a lot). Once I decided to make this drink, my next quest was to find orange gin.

The book recommends Seagram’s Twisted Gin. While Twisted Gin is still made, in flavors such as apple, melon, red berry and lime, orange is no longer available (and I really, really can’t imagine why). Gordon’s made an orange gin up until 1988. I asked Dr. Cocktail on Twitter, and he suggested to make your own:

Still, for me there is the thrill of the hunt, so I was determined to find a bespoke orange gin. I finally found Williams Chase Seville Orange Gin in the UK, and ordered a bottle, and thus was finally able to make this cocktail.

Heh, it’s just okay. Now, I liked the gin, and I enjoyed the drink, but it is just not something I’d seek out. I hate recipes with “juice of one quarter orange” since that is such an imprecise measure. For this cocktail I used slightly more than a quarter ounce of orange juice and slightly less than a quarter ounce of lemon juice, and I think I over-poured the bitters. I’ll be using the gin again, however.

Notes: I got the orange gin from a website called The Whisky Exchange.