The Secret Cocktail, also known at The Pink Lady: 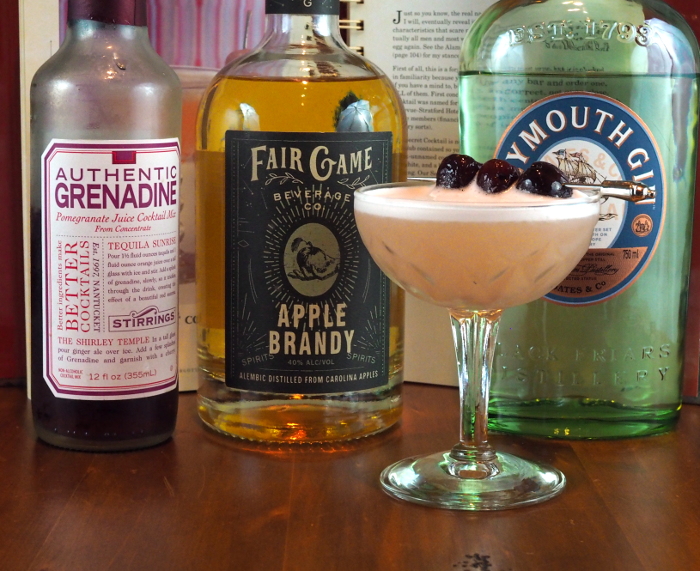 Shake it up with all due vigor in an iced cocktail shaker, strain into a cocktail glass, and serve with a cherry

Okay, so as I get close to the end of this experiement – my plan to make every recipe in Ted Haigh’s classic Vintage Spirit’s and Forgotten Cocktails book – I’ve been thinking about the next challenge. I do plan to make the drinks in the “Extra Credit” section, but as I’ve learned more about cocktails in the last year or so I’ve also branched out. I’ve read Wondrich’s Imbibe!, Wilson’s Boozehound, and the amazing Death & Co. recipe book. (Just for completeness, I do own a copy of Liquid Intelligence and I have The Dead Rabbit on my wish list.)

So now I find myself cross referencing the recipe’s in Dr. Cocktail’s book with those in Death & Co.. I’ve learned a few things, namely that Haigh doesn’t care for overly sweet (or as some would say, sweet) drinks. And when he says “dash” he means a goodly dash – a haul back and fling with all one’s might kind of dash. Finally, he rarely specifies a particular brand of spirit. This can be difficult for a novice like myself to know what to use for a particular cocktail. For example, I probably have over ten different gins in my collection at the moment, from some so “juniper forward” that you feel like you are drinking pure pine rosin to one that a friend of mine described as “tastes like bacon”. So which one should I use?

Death & Co., on the other hand, is very specific, often calling for obscure ingredients and brands that I can’t even find on Google. Since I decided to tackle their corpus of 500+ recipes as my next project, I thought I’d see what they had to say about the Pink Lady.

Dry shake all the ingredients, then shake again with ice. Double strain into a rocks glass over 1 large ice cube. Garnish with three brandied cherries on a cocktail pick.

I decided to make it both ways, and both drinks were really nice. Andrea preferred the Death & Co. because it was sweeter, and I have to admit I liked better as well. I stole the garnish from the Death & Co. recipe since I make my own brandied cherries, but I think a drink this pretty deserves a coupe versus a rocks glass.

It’s hard to describe the taste of the drink. You get the gin, of course, and the egg white makes everything really smooth and creamy. The applejack adds a nice depth to it, and the drink is stronger than the name would suggest.

Notes: I used the Death & Co. recommended Plymouth gin, and the amazing local (to me) Fairgame Apple Brandy (and I have been begging them to make a true, aged peach brandy). I bought a bunch of Stirrings Authentic Grenadine before I learned I should make my own, so I’m trying to use it up (and it is quite good for bottled).

2 thoughts on “The Secret Cocktail”