In my previous post I was lamenting the fact that I had returned from a trip and while I wanted to try a new cocktail, I was out of fresh fruit which limited my choices.

The next morning I was eating breakfast, which for me usually consists of fruit. As I was finishing off a container of pineapple that I had sliced, Andrea pointed and said, “hey, didn’t you need pineapple juice for your cocktail?” 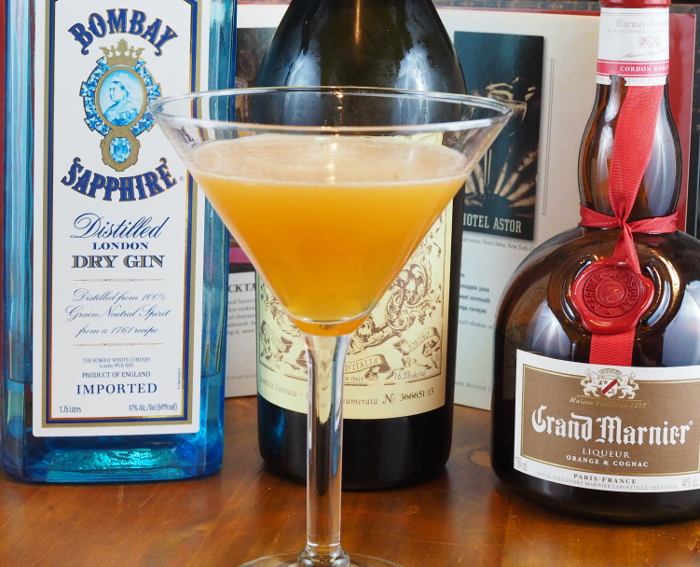 Shake in an iced cocktail shaker and then strain into a cocktail glass.

When planning on making this drink, I didn’t realize that I was entering in to a huge debate on “orange liqueurs”. The problem I had was that it is not possible to buy orange curaçao in North Carolina. It simply isn’t on the State’s price list. So I started wondering if I could substitute something else.

Orange curaçao is originally from the island of Curaçao in the Caribbean. It was made from the peels of the bitter oranges that the island produced, and often it was mixed with another spirit such as brandy. This is in contrast to triple sec, which tends to just be the orange liqueur, and it also tends to be clear. The most common high end brand of triple sec is Cointreau which has already been featured here, but I was wondering if I could substitute something else for the orange curaçao, such as Grand Marnier.

From what I could find on-line it seemed that Grand Marnier, which was originally called Curaçao Marnier, would do nicely as a substitute. I was all ready to proceed when I stumbled upon the section of the book on the Satan’s Whiskers Cocktail. Apparently it comes in two versions: one made with orange curaçao and one with Grand Marnier, which seems to suggest a noticeable difference. From the book:

“Perhaps one of the reasons people express a preference for the Grand Marnier variety is that they’ve never had really good curaçao. Marie Brizard makes one, but it tastes to me more like Grand Marnier than a classic curaçao. Top-notch Gabriel Boudier Orange Curaçao from France can be ordered from U.S. sources, and it isn’t expensive.”

In any case, since I can’t get his recommended brand of curaçao (the one by Gabriel Boudier is apparently only easily available in California) nor Senior Curaçao, which is still made on the island. I’m going with Grand Marnier when orange curaçao is needed and I think it will still be authentic. Yes, not far into this experiment and I’m already disagreeing with the author, but so be it (there is another cocktail I’m all ready to disagree about but for various reasons that will have to wait until New Year’s Eve). At least I can find the Senior Curaçao at Binny’s so I’ll be sure to get it the next time I’m in Chicago and see if it really makes a difference.

Now, back to the cocktail. The book says the recipe is from New York City in the 1940s. When I first tasted it, Andrea asked me if I liked it and I had to reply “I don’t know.” Sometimes that first sip can be confusing, in part because I have an idea of what the drink should taste like in my head and often it doesn’t match what hits my tongue. She tried it and liked it a lot, and on subsequent sips I found I liked it as well. It’s fruity without being overly sweet. Unfortunately, I didn’t have enough left over pineapple juice to make another, so being the chivalrous man I man, I let Andrea drink most of it.

But then I did buy a pineapple at the store today …