The first cocktail recipe in the book is the Alamagoozlum Cocktail: 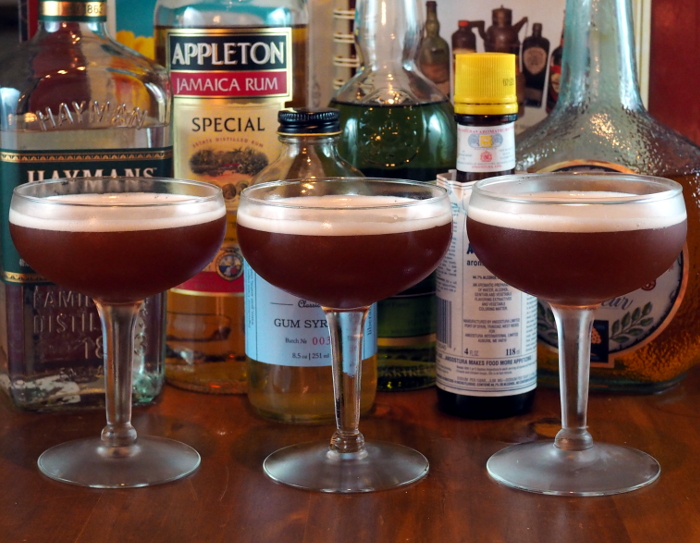 This is an odd one, and I find it ironic that this cocktail managed to come first in the book, as it perfectly illustrates what a vintage and forgotten cocktail should be. It contains a number of obscure ingredients, which took me some time to assemble. Then I had to wait until I had two other friends around who wanted to try it, ’cause the recipe makes enough for three glasses.

I liked the drink but I doubt I would seek it out. It is spicy, I think mainly due to the large amount of bitters involved. I really enjoyed the “mouthfeel” of the drink. The egg and the gomme syrup combine for a luxurious silky feeling as you drink it.

Notes: Lots of notes for this one. The only “genever” style gin I own is the Anchor Genevieve Gin that is one of the more expensive bottles I’ve purchased for this experiment and my least favorite. I don’t know why I don’t like this gin, but my friend Frank summed it up, after a sip, with “Hrm, tastes like bacon”. Instead I used Hayman’s Old Tom, which is a gin somewhat between genever-style and London dry. I think it worked out fine. The Jamaican rum I used was Appleton’s Estate. I used authentic green Chartreuse. The gomme syrup was from Liber & Co. and the curaçao was Senior Curaçao.