Milk in a cocktail? It’s key in Milk Punch: 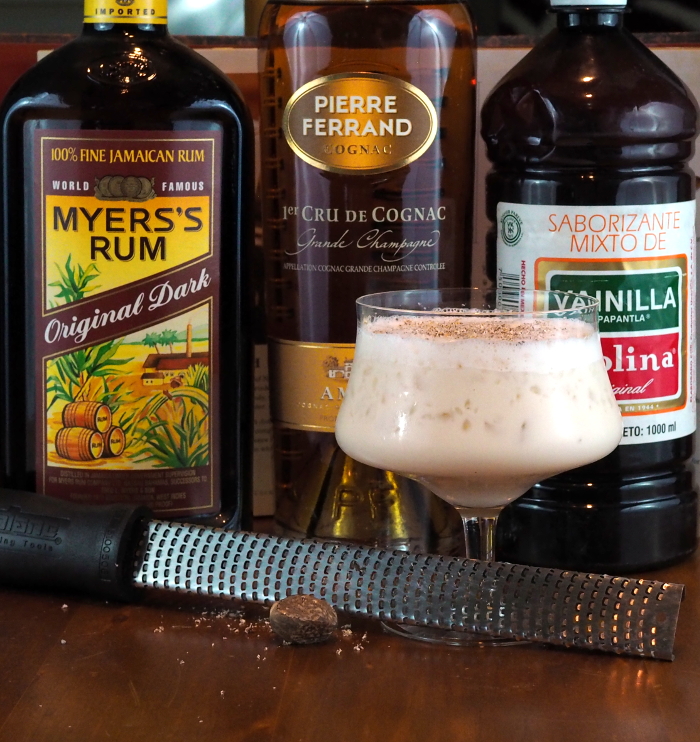 Shake the ingredients all together in a cocktail shaker with cracked ice. Strain into a tumbler half full of shaved ice (Shaved ice was more like snow than crushed ice, but if you pound your ice to smithereens, it’ll be similar enough). Grate or shake some nutmeg on top.

Okay, I have a ton of stuff to write about this cocktail, most of which has nothing to do with the drink.

First, I suffer from mild OCD and the reason I made it was that it completed the middle column of drinks in the index. That one missing link was bothering me.

Second, this isn’t the first cocktail I’ve made with milk. I’m about to share with you a secret recipe from my misspent youth. When I was in college my friend Joe and I used to make Destroyers. This was a blender drink that was tasty, powerful and cheap.

Go to the store and buy some limeade concentrate (not lemonade). You want the small cans, I think they are six ounces but might be eight. Run it under water until it thaws just enough so that it will come out of the can. Plop that into a blender. Fill the now empty can with vodka – non-flavored but any brand will do. Next, fill the can just past halfway with milk. Yes, milk. Fill the rest of the blender with ice, and blend.

I’m certain my adult palate would not care for these, but we drank a lot of them in school.

The reason I bring up Joe is that after one rather large Destroyer party (we bought limeade by the case and burned out more than a few blenders back then) he decided to walk a young lady home across campus. On his way back he was walking through a parking lot, and for some reason decided to see how many students left their cars unlocked. Turns out it was more than you would expect. Then, it dawned on him to wonder what would people keep in their cars if they left them unlocked.

At this point he hasn’t really committed a crime. That happened when he started keeping souvenirs from his explorations. We not talking stereos. More things like a tube of Mr. Zog’s Sex Wax.

Anyway, campus security came rolling through so he decided it was time to hide. Due to his “destroyed” state he thought if he can’t see them, they can’t see him, so his hiding place under a truck was given away by his feet sticking out.

When they found him, he didn’t have his student ID with him and when he tried to give them my name, they couldn’t find me (I had not yet registered my car and I’m not sure he was pronouncing it clearly to begin with). So they called the real police and he went to jail.

I found out about it the next morning and we got together and raised bail. He went to court and got community service, but from then on we’d only serve Destroyers with the warning “Use a blender, go to prison”.

Now, back to this cocktail. I made it and served it to Andrea, who went “Ugh, this is gross. Make me a Pink Lady“. I actually liked it more than I thought I would.

The key lies in the ice. You really do want very fine ice – think snow or at least snow cone. I took crushed ice from the refrigerator and stuck it in the food processor, but I don’t think I got it fine enough. If the ice were fine, I think this drink would have more the consistency of a milk shake, and in fact I might add brandy and rum to my next vanilla milk shake, purely in the interest of science of course.

You do want to use larger cubes in the initial step as the milk will foam up and then it is hard to strain. Use whole milk as directed – we’re going for a certain texture here and that 2% crap won’t cut it.

This is supposed to be a morning libation and I think it would go really well with waffles, or better yet, fresh Cafe du Monde beignets.

Notes: I used Myers’s Dark Rum and Pierre Ferrand Ambre Cognac. The latter was a birthday present from my friend Jeff and is used in a lot of Death & Co. recipes. To my knowledge it is unavailable in North Carolina. The vanilla is from Mexico – I love Mexican vanilla and implore my friends to bring some back for me whenever they go there.