Andrea works in a larger city than where we live and they have an ABC store that stocks a greater variety of things. Last night she brought home a bottle of Bénédictine (which I would have to order locally) and so I decided to make a cocktail that featured it: The Straits Sling. 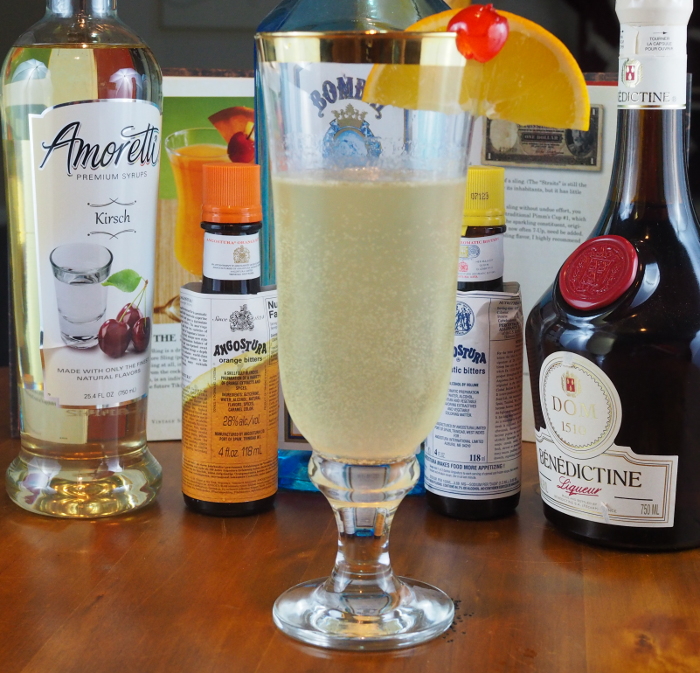 Shake everything but the soda water in an iced cocktail shaker. Strain into a sour glass or champagne flute. Fill with soda water. Garnish with a cheery, an orange wheel, a lemon twist … go crazy

One of my first cocktail memories is from a now defunct Chinese restaurant in Raleigh, NC, called Hang Chow. My friends and I would often go there for Sunday brunch and have a Hang Chow Sling. This was a sweet, fruity, decadent take on the famous Singapore Sling, which happened to be the only “sling” cocktail I had known.

The origins of the Singapore Sling have often been contested, but dutiful cocktail historians have tracked down what they think is the original, which is presented here. It is called the “Straits Sling” because under British rule Singapore was part of the Straits Settlements. One key difference is the use of clear kirschwasser instead of cherry brandy.

My version didn’t turn out to be the same color as the author’s and I’m not sure why. It was much paler, and perhaps his “dash” doesn’t equal mine. I found the drink to be very refreshing, and I would probably want to go with it versus, say, a Gin and Tonic on a hot day. Andrea didn’t like the way it finished, so I got to drink most of this one.