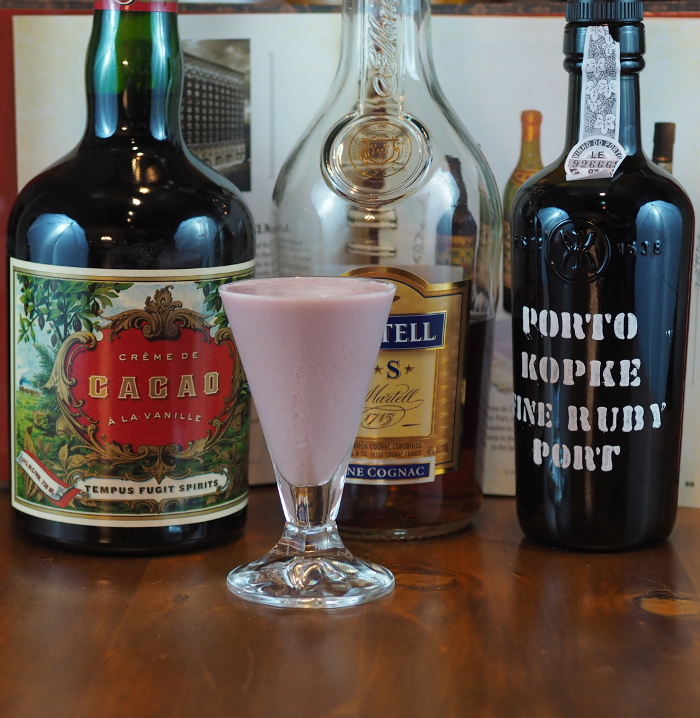 Shake in an iced cocktail shaker, and strain into a small cocktail glass.

I like the name of this cocktail because I live in Chatham County, North Carolina, and you don’t see the word “Chatham” all that often (I always have to add it to my spell checkers). It was named after a now gone hotel in New York City.

This is one of two cocktails in the book featuring port (the other is the Coffee Cocktail) and one of two drinks classified as “dessert cocktails” (the other being the underwhelming Soyer au Champagne). I had to learn a little bit about port before I made it. Over the years I’ve been gifted with a couple of bottles, but I wasn’t sure if any of them were “ruby” or what even was meant by “ruby” since most ports tend to be dark red in color.

Turns out there are lots of different types of port: ruby, tawny, vintage, late bottled vintage, etc. There is usually a good way to tell what you have as it should be clearly written on the bottle. Ruby port is young port – it’s made to be consumed right away without aging.

Which brings me to another thing I’ve learned. One of the things I like about making cocktails is that the spirits can last indefinitely (with a notable exception in spirits like Bailey’s Irish Creme – trust me, don’t let that age for more than two years before using it). Wine, on the other hand, needs to be consumed pretty soon after opening. Wine used in cocktails is no exception, and that is why I’m glad to have learned that you can often get half bottles (375ml vs. 750ml) of it. While port can stand to be out for up to a month or so after it has been opened (as long as it is kept out of the heat), other wine ingredients like vermouth really do need to be stored in the refrigerator and kept fresh (I replace mine one month after opening). Since a good vermouth can cost around $30, you don’t want to have to pour that down the drain, so get half bottles for the home bar. You’ll be glad you did.

Okay, back to this drink. I wanted to make it because I got a cute little glass that only holds about 2.5 ounces which made it perfect for the Chatham Hotel Special. The port and creme also turned it a nice purplish pink color. And it tastes good, the first sip finished a little off for me but I didn’t get that for the rest of the drink. Not something that I would seek out, but I wouldn’t turn it down if offered again.

Rating: 3/5. This is a very, very strong three. I went back and forth over what to rate it and ultimately had to compare it to other 4s and I just decided I’m not one for dessert cocktails, so most of the time I would prefer one of those other drinks.

Notes: I used Martell cognac, and a crème de cacao from Tempus Fugit Spirits. I used Porto Kopke Fine Ruby Port which in nice and inexpensive, and available in 375ml bottles.