A precursor to the Margarita is The Brandy Crusta: 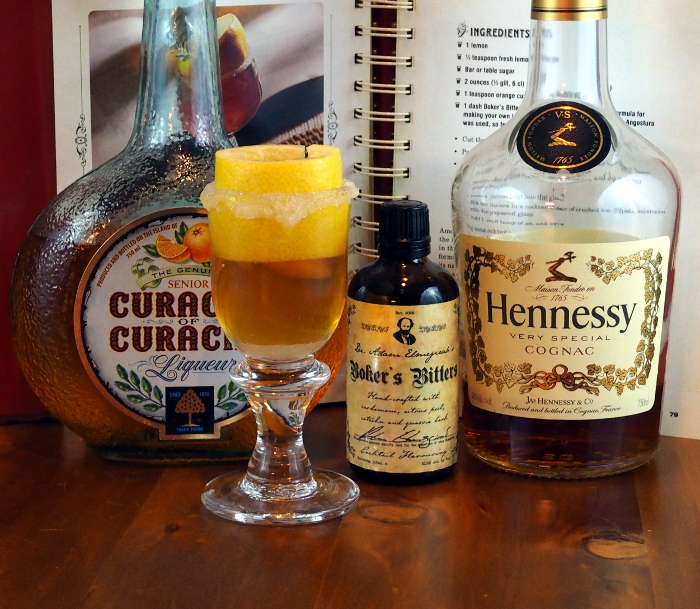 Cut the lemon in half. Pare the full peel off half, and squeeze the juice from the lemon. Moisten the glass rim with the lemon juice, and dip it in bar or table sugar. Insert a lemon peel into the glass, Mix the liquors in a cocktail shaker of crushed ice. Shake, and strain into the prepared glass. Add 1 small lump of ice, and serve.

This cocktail is ancient and appeared in the first bartender’s guide ever published, Jerry Thomas’s 1862 Bar-Tender’s Guide. Joe Santini (or Joseph Santina) is credited with inventing the drink in New Orleans 10 years earlier. The “crusta” (named for the sugared rim) begat the Sidecar which begat the Margarita.

This drink calls for Boker’s Bitters which was defunct when Dr. Cocktail published his book. He gives a recipe in the back of the book (which involves quassia chips and powdered catechu which I’m certain you have in your pantry) but I’m lazy so I just bought it on Amazon. The new formula came out in 2009 and is supposedly based on the original formula from 1828 by Johann Gottlieb Boker. Feel free to use Angostura for this drink since it is way more common, but I plan to use my Boker’s in traditional Angostura drinks such as the Manhattan to see which I like better.

I liked this drink, but it isn’t something I’d seek out. It’s mainly cognac so if you like brandy and cognac straight this will add a nice little flavor dimension.

Notes: I used Hennessy cognac ’cause I had some and doctor’s orders. For the curaçao I used Senior Curaçao, again because that’s what I had on hand.