When you have a bar in your living room, you end up collecting bottles of spirits. Some are gifts, some are random purchases and some end up there when people move and don’t want to ship the bottles, etc.

Thus I have no idea how a bottle of Captain Apple Jack ended up in my collection, but I figured I’d use it in the Jack Rose Cocktail: 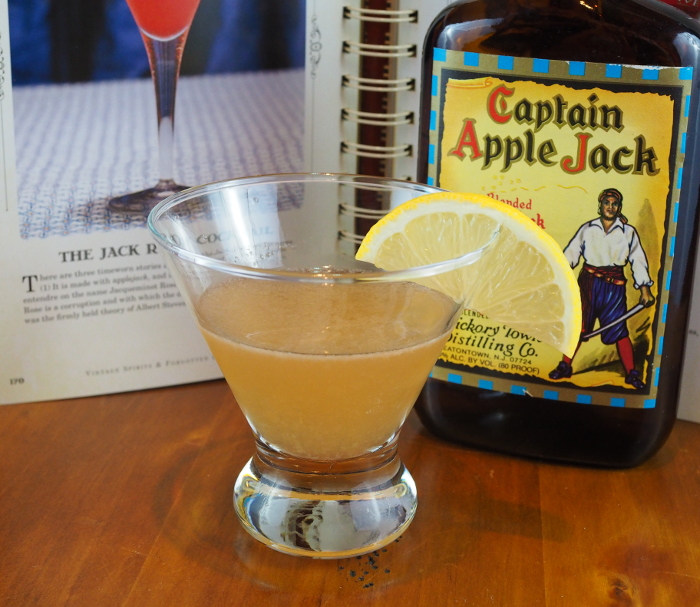 Shake well in an iced cocktail shaker, strain into a cocktail glass and garnish with a lime or lemon wedge

This drink was just wrong. It was so wrong I made it twice to try and figure it out and it was still wrong.

The first problem I noticed is that the drink I made looks nothing like the color in the picture from the book. Mine was a pale peach color while the “proper” Jack Rose should be, well, rose colored. Since the ingredients are few, I may have messed up on the amount of grenadine, so I researched and found that a “dash” is often referenced as 1/8th of a teaspoon. I figured maybe I didn’t use enough.

According to the Wikipedia version of this recipe, I would up the applejack to 2 ounces and the grenadine to half an ounce. This is probably more accurate.

The problem might be with the applejack I used. From the book, applejack was “the first natively distilled spirit in the colonies that would become the United States”. While technically a brandy since it is made from a fruit base (apples) it is supposed to taste more like apple whiskey than brandy. It was invented by William Laird in 1698 (talk about vintage) and there is still a brand of applejack called “Laird’s” that is available at Binny’s.

Captain Apple Jack is the only applejack I can get in North Carolina with the exception of Carl’s Carolina Applejack Moonshine, which might be worth a shot.