“What is a cocktail?” A question raised by Pink Gin: 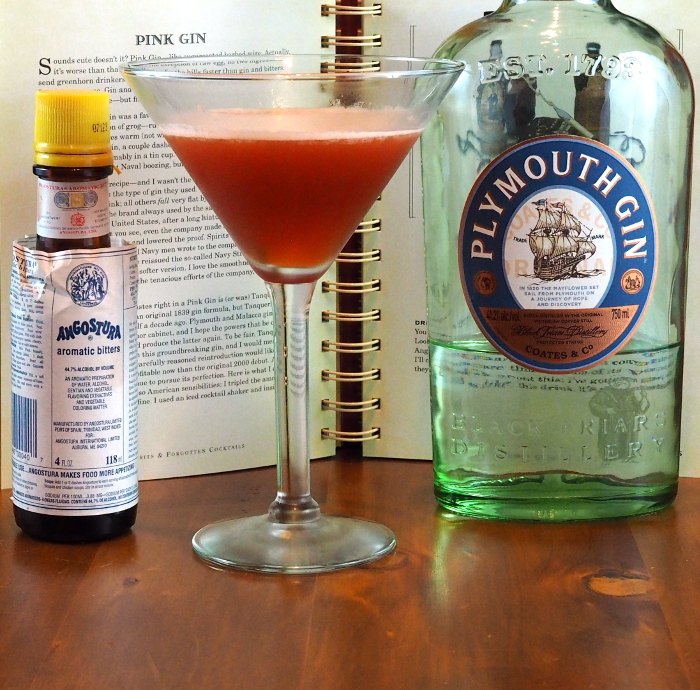 According to Wikipedia, the first use of the word “cocktail” to refer to a beverage was in 1806:

“Cock-tail is a stimulating liquor, composed of spirits of any kind, sugar, water, and bitters”

So, what happens when you forget the sugar and water? What makes a cocktail a cocktail and not just swilling booze from a bottle? Can I put a small cube of ice in a glass of Powers and call it a cocktail? There is an entire class of two ingredient cocktails called the “highball” but the second ingredient is usually a fizzy soda product that is more than just water. I was not looking forward to making this drink.

I decided to treat it as the world’s driest Martini with the bitters standing in for the vermouth. I chilled the glass and made sure the gin was good and cold.

The first thing I noticed was that it was more orange than pink (if you want pink, I bet Peychaud’s bitters would do the trick). At first taste my fears were confirmed – too bitter and not much character.

But as I drank the rest of it, my opinion started to change. It reminded me a little of a Manhattan (obviously due to the bitters) and I think if you back off the bitters a bit (to maybe four goodly dashes) it would be balanced. Overall, I liked it more than I thought I would, although a dirty Martini with a good dry vermouth is more my speed.

Rating: 3/5 by the barest of margins.

Notes: I used Plymouth gin, because according to Dr. Cocktail that is not negotiable. He mentions that this was a Navy drink, and perhaps with Navy strength gin it would have been better, but I have yet to acquire the Navy strength Plymouth.