A cocktail I won’t make, it’s the Ritz Sidecar: 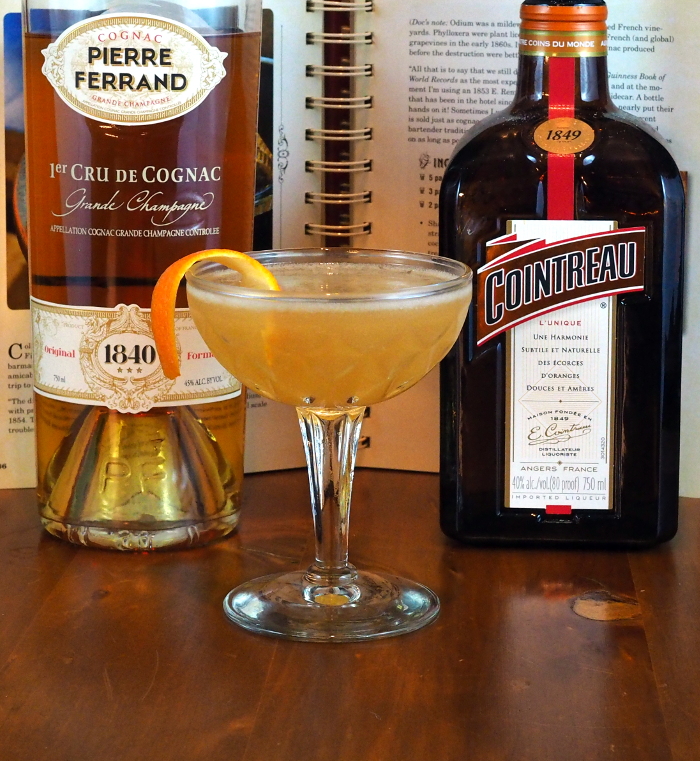 Shake in an iced cocktail shaker, strain tremulously into a chilled cocktail glass, and stare at the treasure in rapt silence for a full fifteen seconds before quaffing.

By “very old cognac” he means at least pre-Phylloxera cognac. Phylloxera is an aphid-like insect that was brought to Europe from grape vines in America. The American vines had resistance to it, but the European vines were devastated. While I’ve never had cognac that old, I’ve been told that many people believe it was better than that produced today. The real cognac snob wants pre-Oidium cognac. Oidium, from what I can tell, was a form of powdery mildew that caused damage to French vines starting in 1854 before Phylloxera came along to finish the job.

The Sidecar is a classic drink, born out of the Brandy Crusta. I used to drink Sidecars before I even heard the term “vintage cocktail” and I can remember having a wonderful one in an outdoor restaurant in Portland, Oregon many years ago. I can’t remember the restaurant but I can remember the drink.

The Ritz sidecar is a Sidecar made with this very expensive cognac. It is named after the Hôtel Ritz in Paris, but while it was the “most expensive cocktail in the world” when the book was written, in 2014 it was only the 8th most expensive, coming in at US$1670 (there are cocktails going for almost fifty times that amount now, usually involving diamonds).

If I had access to cognac that old (and a quick Google search found a number of bottles going for around US$5000 with the cheapest just south of US$3000) I don’t think I’d mix it with anything, but if so, it would have to pair with a rare example of Cointreau (my local liquor store had a bottle for about US$300 but I’m not sure what it was, exactly).

Anyway, there is nothing wrong with a good ol’ post-Phylloxera Sidecar:

Combine in an iced cocktail shaker. Shake, and strain into a cocktail glass.

Dr. Cocktail states that this works well because you can play with the ratios. Too strong, decrease the brandy. Too sweet, add more lemon, etc.

I am fond of the recipe from Death & Co.:

Shake all ingredients with ice, then strain into a coupe. Garnish with an orange twist.

When I saw “Pierre Ferrand 1840 Cognac” I thought they were referring to a Ritz Sidecar cognac (i.e. using cognac actually from 1840) but I learned that it is a somewhat affordable cognac that is made in a style to reflect the way they did it back then, but it isn’t 175 years old.

I love this drink. It is one reason I started this journey to make the recipes in Dr. Cocktail’s book. In a world of cocktail lists featuring vodka exclusively and drinks ending in “-tini”, this reminds me what cocktails were all about.

And it also marks the end of Phase One of my experiement. In the past 17 months I’ve managed to make and document all 89 of the main recipes in the book (well, with the exception of this one, and unless my fairy godparents pop for some fancy hooch, or I manage to pick six numbers, it ain’t gonna happen). I also managed to wrangle the recipes to a few other drinks and even had a drink named after me (and I think it was almost as cool to catch Justin looking up his recipe on this blog a year later).

There are twenty-one more in the extras section (well, twenty since I’m counting the Sidecar here) and I plan to make them all. But I also plan to explore more of Death & Co. as well as my newest acquisition, Dead Rabbit. As Death & Co. has more than 500 recipes and I have slight OCD, don’t expect me to list them in the index and to make all of them.

If I list them I would fill compelled, and I’m looking forward to being able to make a drink without having to get out the lights and the camera.

Notes: I made the Death & Co. version of this drink with the Pierre Ferrand 1840 Cognac.