Stir the gin and vermouth vigorously and long in a tall glass filled with ice (or an actual martini pitcher). Add the orange bitters. Strain into a “martini” cocktail glass. Garnish with an olive.

Okay, it is easy to argue that there isn’t a cocktail more classic than the Martini, and it is also easy to argue about how to make a Martini. The recipe above comes from a bar in Barcelona, Spain, called Dry Martini. It was one of the best Martinis I’ve ever had, so I decided to recreate it at home.

Note that it uses a huge amount of vermouth, which may be why I like it so much. Here is Ted Haigh’s recipe for the Classic 1950s Martini:

Stir the gin and vermouth vigorously and long in an iced martini pitcher. Add the orange bitters. Garnish with a pimento-stuffed olive or a lemon twist.

I assume that the step to strain into a martini glass is implied.

Note that the ratio of gin to vermouth has gone from 1:1 all the way up to 6:1 (which is the standard, apparently). Modern versions use even less vermouth, with the joke being “pour in the liquor and hold the glass up next to a bottle of vermouth”.

Look, if you want to swill straight gin or vodka, I’m not going to stand in your way, just don’t call it a Martini. The vermouth is important, but I think most people don’t treat their vermouth very well, and this is why they don’t like it.

Vermouth is a wine product, not a spirit, and so it has a much, much shorter shelf life. In fact, if you have an opened bottle of vermouth on your shelf, throw it out. Once opened, keep it in your refrigerator. If you have a bottle in your refrigerator and you can’t remember opening it, throw it out. This is why I buy 375ml bottles – I actually don’t drink that much but I can usually get through the small bottle before it loses its flavor.

When fresh, it makes a great drink. Dry Martini was the first place I saw the 1:1 ratio, but just recently my friend Justin (the cocktail chef at Oakleaf) made his 1:1, using a Spanish vermouth called Yzaguirre. He thinks that vermouth is outstanding, so while I’m a Dolin traditionalist, I will have to try it.

Stir all the ingredients over ice, then strain into a Martini glass. Garnish with a lemon twist.

There are a couple other misconceptions about the Martini that need to be cleared up. First, for me the Martini involves gin. I don’t really care for vodka in cocktails – it has no flavor unless it has been artificially added. I have exactly two bottles of vodka in my collection and an entire shelf full of gin, so please understand my bias.

But, you may ask, what about James Bond? Doesn’t he drink Vodka Martinis?

Not exactly. In the books he drinks Vespers, which involve gin, vodka and Kina Lillet. They are also shaken, but the traditional Martini is stirred.

Dr. Cocktail refers to a “martini pitcher”. While I had never heard of a martini pitcher before, at Dry Martini they have these very tall (over one foot high) vessels completely filled with ice that they use to make the drink, and I assume that’s what he means. The drink comes out extremely cold, which is nice. 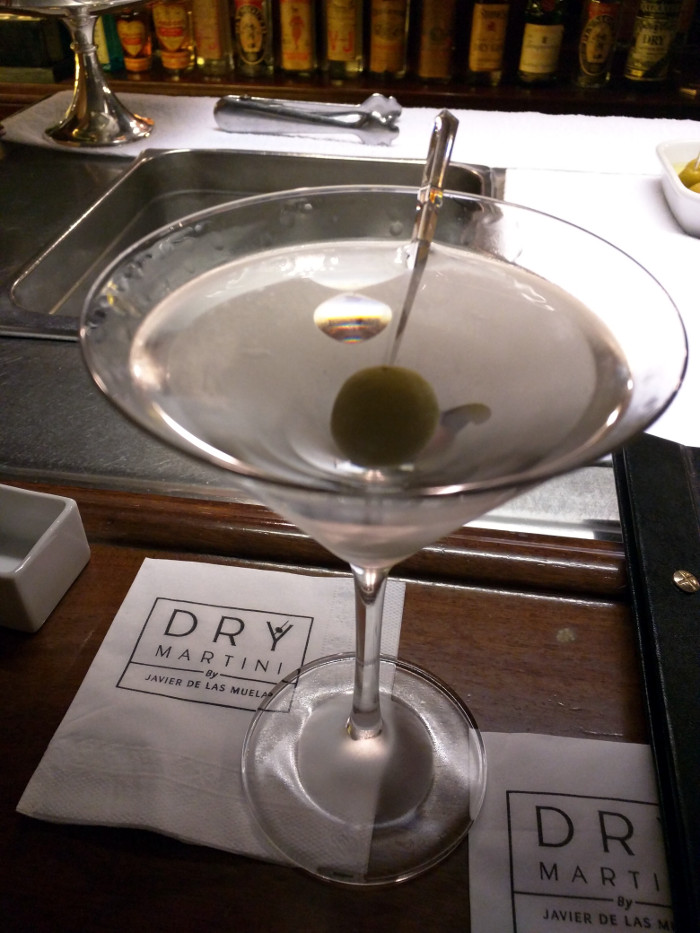 So go out and get yourself some nice vermouth and try the 1:1 Martini. You’ll be glad you did.

Notes: When it comes to Martinis, my go-to gin is Bombay Sapphire, which is why I have such a large bottle. I used the French Dolin Dry Vermouth as well. I used my special barrel-aged Fee Brothers bitters.

2 thoughts on “The Martini”