It’s another classic, the Old-Fashioned: 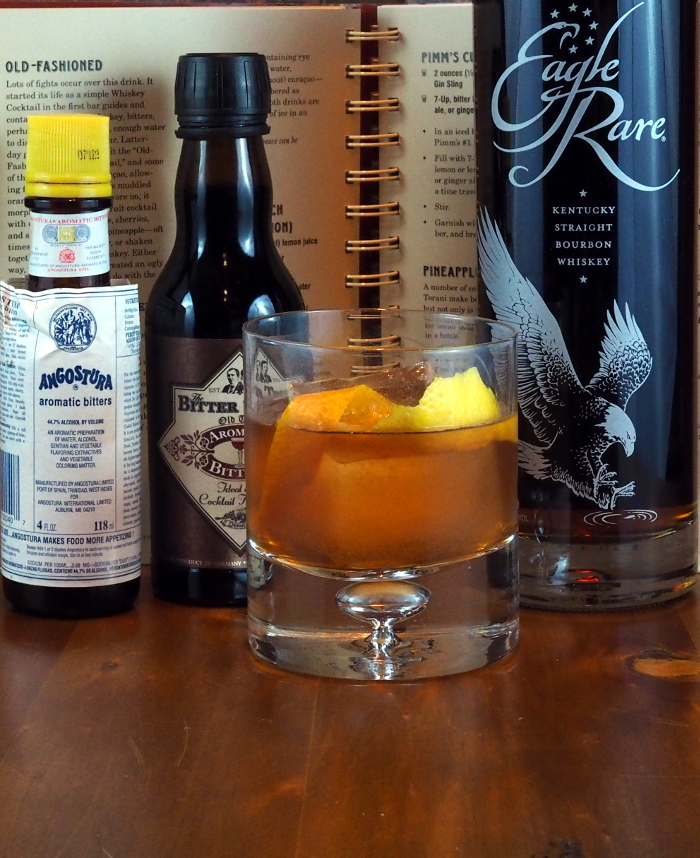 Stir all the ingredients over ice, then strain into a double rocks glass over one large ice cube. Garnish with an orange and a lemon twist.

Okay, the above recipe doesn’t come from Dr. Cocktail’s book, but he does hold forth on what makes an Old Fashioned. This is one of the “primal” cocktails, and I as mentioned in the write up for Pink Gin, cocktails started out as spirit, water, sugar and bitters – that’s it.

A cocktail made with whiskey, then, was simply called the Whiskey Cocktail, and in those times whiskey meant rye. In addition to the four main ingredients, you might find a bit of curaçao. As time went on and newer cocktails were invented, the curaçao was replaced with a muddled orange peel and the drink was referred to as the “Old Fashioned Whiskey Cocktail”, soon to be shortened to “Old Fashioned”, and bourbon became acceptable as well as rye.

Since Dr. Cocktail doesn’t really list an exact recipe, I took this one from the Death & Co. book.

Now I struggled with bits of Vintage Spirits because in many cases he would not specify particular brands of spirits. Since they can have different flavor profiles, I was never sure if my choices matched up to what he had in mind. Contrast that with Death & Co., whose ingredient list can sometimes border on alchemy:

I was happy to find that I actually had some of the required bourbon for their Old Fashioned recipe, and a quick trip to Amazon got me the Bitter Truth Aromatic Bitters.

Now usually I don’t just run off and buy bitters. I have a lot of different bitters, those from Madame LeCroix notwithstanding, but these Bitter Truth bitters appear in a number of Death & Co. recipes, so I figured I should get some.

I want to note that the Death & Co. book has over 500 recipes in it, but I’m currently stuck in the “Classic and Vintage” section. This means I open the book to page 150 (easy to remember) and then flip through the alphabetically listed recipes. The words “Bitter Truth Aromatic Bitters” caught my eye more than once.

Which brings me to a trick I learned about bitters. In my quest to understand cocktails, I often taste the ingredients individually. Now I don’t have the most accomplished palate, but I have started to learn how things taste and I can imagine how they will come together. My friend Justin taught me a trick about bitters. To taste them, put some water in a small glass and add several goodly dashes of bitters to it. You then have enough to get the bitters to the various taste centers on your tongue without being overwhelmed.

So I did this with both the Angostura bitters and those from Bitter Truth. Tasting the Angostura bitters was very familiar – fragrant with an herbal tang and a distinct bitterness. The Bitter Truth – wow. When they say “aromatic” they aren’t kidding – you can smell it long before the glass gets to your lips. Very spicy, almost with a chili burn but without the fire, and the bitterness really packs a kick. Please forgive my prose as I’m not used to writing about such things, but I can now recognize the role these bitters play in the drink.

And it is a fine drink. I don’t need an excuse to drink bourbon, especially one as nice as Eagle Rare, but the sugar and the bitters do what they are supposed to do: accentuate the already great flavor of the bourbon. Ultimately, the quality of the Old Fashioned is dependent on the quality of the whiskey.

Notes: The Death & Co. recipe for Demerara Syrup is two parts sugar to one part water. It’s very sweet but you don’t use much of it.