A confusing drink is The Gimlet: 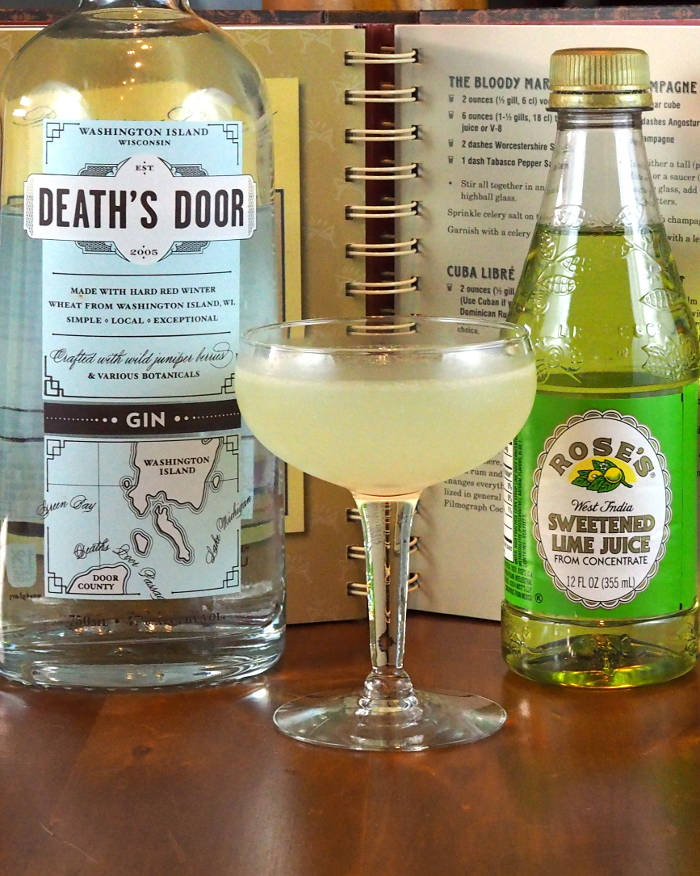 Combine in an iced cocktail shaker. Shake and strain into a cocktail glass.

I say confusing, because in the Appendix to Dr. Cocktail’s book he says the Gimlet should consist of gin and Rose’s Lime Juice Cordial, but because it was too sweet, he combined the recipe with that of the Gin Rickey. But what part was Gimlet and what part was Rickey?

According to Wikipedia, one description for The Gimlet is “half gin and half Rose’s lime juice and nothing else”. I cross referenced it with the Death & Co. book, which lists the following for the Gimlet:

Shake the gin and lime cordial with ice, then strain into a double rocks glass over cracked ice. Garnish with a lime wedge.

Since Death & Co. is all about perfecting drinks, I wouldn’t expect them to use an off the shelf lime cordial, even if a specific brand is historically accurate. Toby’s Lime Cordial is made with equal parts lime juice and sugar (by weight) with lime zest added for “tanginess”. Mix it all together and let sit for a day or so. They also have a recipe for the Gin Rickey:

Short shake all the ingredients (except the club soda) with 3 ice cubes, then strain into a highball glass filled with ice cubes. Top with club soda. Garnish with a lime wedge.

From what I understand, the key ingredients of a Rickey are lime and soda water, so it looks like all the good Doctor did was substitute some of the sweetened lime cordial with pure lime juice. I also asked my friend Justin for his recipe for the Gimlet that he served at my last birthday party:

Combine in an iced cocktail shaker. Shake and strain into a cocktail glass.

Note the lack of lime cordial, but since that is just sugar and lime, it seems pretty close.

Anyway, I made two versions of this: Dr. Cocktail’s way and Justin’s way. The latter was for Andrea, since I knew she had that drink at the party and liked it.

It is a very nice drink but I also liked mine – it actually wasn’t too sour and had a little more kick due to the extra gin. I think the added sweetness of the lime cordial would pair well with a navy-strength gin, so I’ll have to revisit this as the weather gets warmer and use the Death & Co. recipe.

Notes: I’m not a big vodka drinker, but this drink should work with that spirit. I used Death’s Door gin for mine (kudos to Jono for introducing it to me) and Broker’s for Andrea’s drink per the instructions.