By special request, it’s The Sazerac: 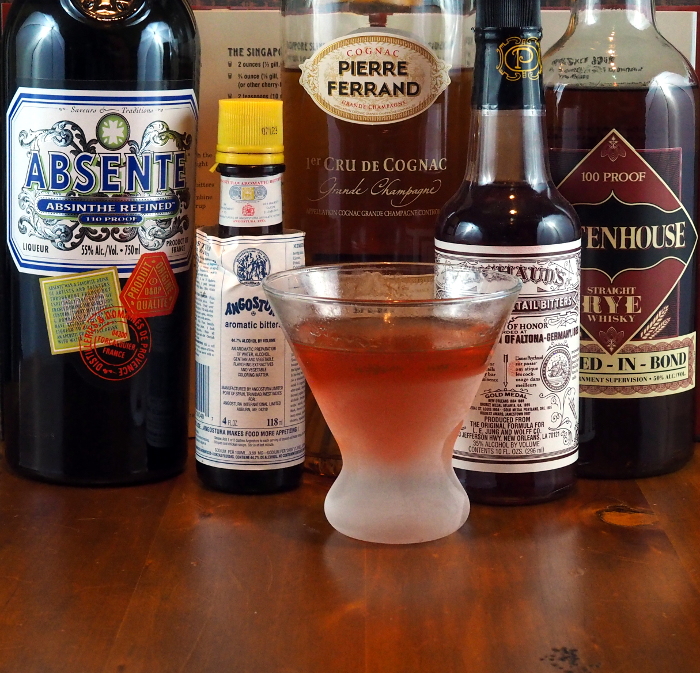 Chill an old-fashioned glass. Coat the inside of the glass with the absinthe or pastis, leaving a slight puddle in the glass bottom. Add the simple syrup and bitters. In a separate mixing glass, combine the whiskey and the simple syrup with ice and stir. Strain the contents of the mixing glass into the old-fashioned glass. Smartly twist a strip of lemon peel over the surface of the drink and discard (or toss in; I’m not here to judge). Serve.

Okay, so the Sazerac is one of those vintage cocktails that are starting to appear on modern drink menus, and without exception every one I’ve had has been horrible. Like, barely drinkable horrible and not just “I don’t care for this drink” horrible. Note that I never asked my friend Justin to make me one, so I would assume his would be an exception, but for now I only drink Sazerac’s that I make myself.

More than almost any other cocktail I’ve made for this blog, the Sazerac takes technique. Even Dr. Cocktail’s instructions are a little vague, I didn’t understand what to do with the simple syrup as it was written, so I asked him on Twitter.

The fact that it is so hard to make is a shame, since it is a very nice cocktail.

The Sazerac is truly vintage, dating from around the 1850s in New Orleans. It is the official cocktail of that city – so forget wandering around Bourbon Street with a fishbowl of Hurricane around your neck – this drink typifies the Big Easy. 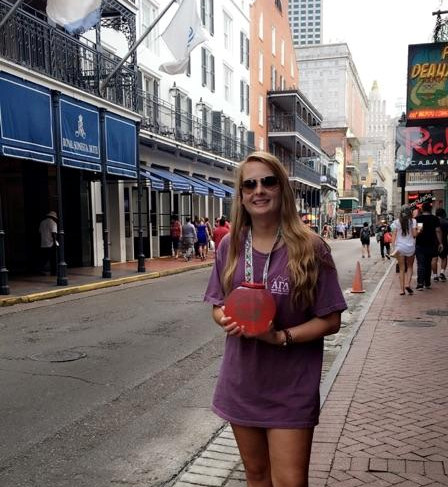 It was originally made with a pre-phylloxera Cognac called Sazerac-de-Forge et Fils and when that became unavailable the recipe switched to rye. The locally produced Peychaud’s bitters adds to the association (and adds a nice purplish hue to the drink). The bar that invented the cocktail also spawned the Sazerac Company which is the largest distillery company in the US. They produce a brand of rye with the same name.

I’ve been cross-referencing these recipes with those from the Death & Co. book, and I really like their recipe:

Rinse a rocks glass with absinthe and dump. Stir the remaining ingredients (except the lemon twist) over ice, then strain into the glass. Squeeze the lemon twist over the drink and discard. No garnish.

I like it for a number of reasons. It is less strong than the one by Dr. Cocktail and combines both a premium rye with a cognac made in the style consistent with those from the mid-19th century. This is the recipe I used, and it parallels a lot of the comments made by cocktail guru Jeffrey Morgenthaler on the drink.

The other reason I liked it was that I had all of the liquor but their recommended brand of absinthe, which is unusual since their choices can be hard to source, especially outside of Manhattan.

So here is how I make it. First, New Orleans is hot so you want this drink to be cold. I chilled a glass in the freezer before making this. Next, follow the Death & Co. instructions and just rinse the glass with the absinthe. The main sin I’ve seen with this drink is too much absinthe which just overpowers the drink. I then put the rest of the ingredients in an iced mixing glass and stirred. As Morgenthaler writes “Do not shake your Sazerac. Remember, shaking a clear drink is like shaking a baby: first there’s going to be a lot of foam, and then you’ll be staring death in the face.”

Words to live by.

The final step is very important – you need a hint of lemon over the top of the drink, similar to the orange peel in the Hanky Panky.

The Sazerac is a complex drink that is well worth the effort to make correctly.

Notes: I used the recommended Rittenhouse 100 Rye, which is a fine rye for classic cocktails. If I ever get a bottle of the Sazerac rye I’ll be sure to try it in the drink, well, because. While I’m not wealthy enough to afford pre-phylloxera cognac, I do like the Pierre Ferrand 1840 as it is supposed to be as accurate as you can get at an affordable price point. I used Absente Absinthe because I had a bottle received as a gift, but absinthe lovers don’t seem to care much for it. The Vieux Pontarlier fares better in reviews, but I have been unable to get a bottle. I think pastis would work here as well. The Death & Co. recipe for Demerara Syrup is two parts Demerara sugar to one part water. It’s very sweet but you don’t use much of it.