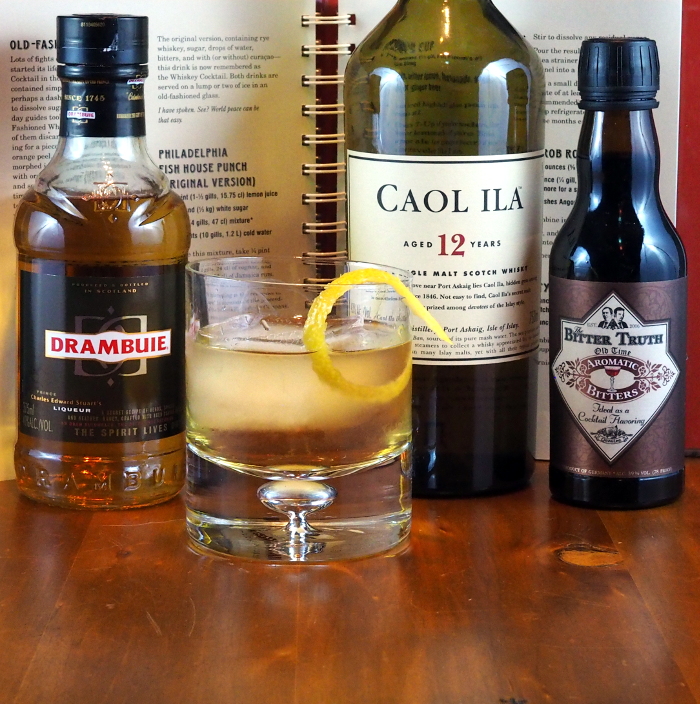 Combine in a small rocks glass on a couple of lumps of ice and swizzle. Garnish with a lemon twist.

I don’t like peaty Scotches. I’m not saying they are bad, it’s just that I don’t care for them. I know that some people seek them out, which has resulted in high peat bottlings such as the Peat Monster, but they just aren’t my thing. De gustibus non est disputandum.

So I was perfectly ready to hate this drink. In fact, the main reason I made it was that it completed the last column in the Index under the “Extra Credit” section and I suffer from mild OCD.

I did want to try it, though, because it features Drambuie, which I had never tried. I sampled a bit of it plain and liked it quite a bit. The first impression was very herbal and I thought it would be like an amaro, but unlike amari it finishes sweet.

For more tips on how to make this drink, I looked up the recipe from the Death & Co. book:

Stir all the ingredients over ice, then strain into a double rocks glass over one large ice cube. Garnish with a lemon twist.

Since I live in North Carolina, I am unable to get Springbank Scotch but my friend Ben has had it and quite likes it. One review describes it as “The peat is present and quite pungent with an earthen rootiness” so I guess we do want a peaty Scotch. I consulted a Scotch flavor map (yoinked from here): 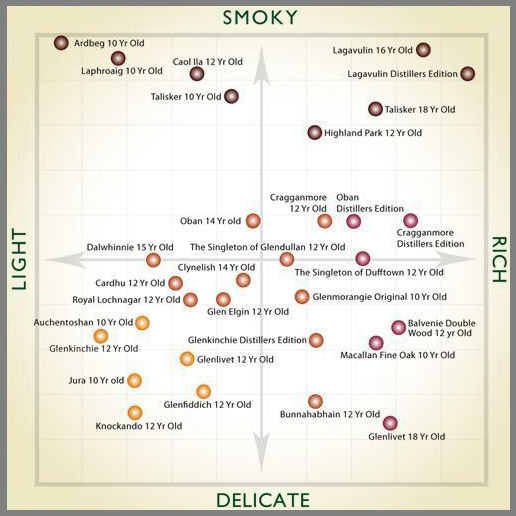 and noted that toward the upper end of the smokiness scale was the Caol Ila 12-year-old. For some reason I happen to have a bottle, stashed in the back of my whisky collection.

When I opened it, the bar was flooded with the smell of a cold charcoal grill left open to a spring rain. I decided to follow the Doctor’s proportions but added the Bitter Truth bitters (since I quite like them).

And, surprisingly, I liked this drink. The sweetness of the Drambuie tempers the peatiness of the Scotch. Not quiet enough, I’d love to try this drink with something like a Highland Park 18, but as I’m still waiting for someone to gift me a bottle of that libation that test will have to wait.

I liked it so much that I asked Andrea to try it. She had a problem getting past the smell, which she compared to burning tires. She literally held her nose before taking a sip and pronouncing it awful, so I don’t expect this drink to be for everyone.

It does make me want to seek out more Drambuie recipes, however.

Rating: 4/5 – this is a very, very weak 4 but I did like it much more than I thought I would. I’m giving the rating based upon the potential for this drink with a slightly less smoky whisky.